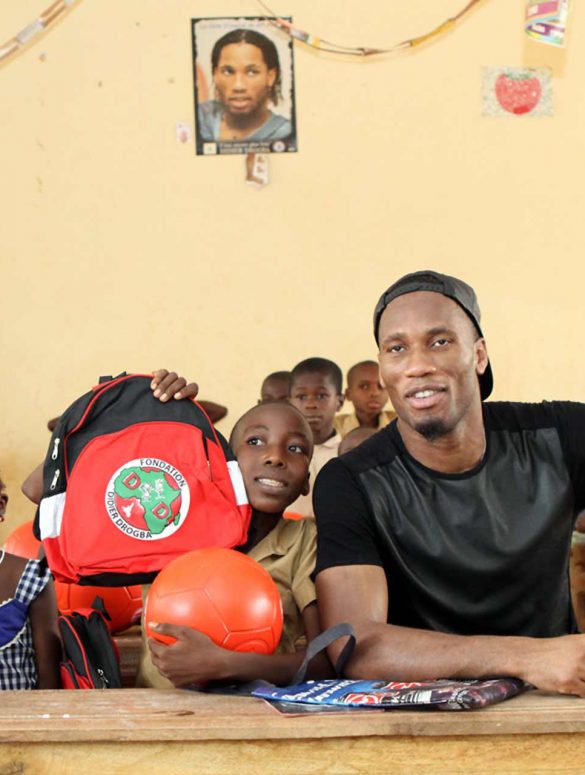 Didier Drogba was born in Abidjan, Ivory Coast in 1978. At the age of five, he emigrated to France, where he started to play football for the youth teams of USL Dunkerque. He made his first steps as a professional for UC Le Mans in 1999. After successful seasons in France for EC Guingamp and Olympique Marseille, Didier Drogba moved to England in 2004 to play for Chelsea F.C.

‘Beware of the drog’

His first seasons were quite changeable. Finishing the season 2006-07 with 33 goals in all competitions and winning the FA Cup made the fans fully appreciate him. After a disappointing loss in the Champions League final 2008, Chelsea and Drogba made it again to challenge for the Europeans trophy in 2012. Drogba scored Chelsea’s only goal and the winning extra-time penalty kick to guide his team to win the Champions League. After his successful time in London, he moved to Shanghai Shenhua and Galatasaray Istanbul where he won the Turkish first-division championship. A short return to Chelsea London FC in 2014 and following seasons for Montreal Impact and Phoenix Rising let him finish his outstanding career in club football and retire from competitive play.

Next to his successful career in club football, Drogba also led his national team, Ivory Coast, to two World Cups, in Germany (2006) and South Africa (2010). Drogba is recognized for his 8 years as the team’s captain, the country’s top scorer with an overall tally of 65 goals in 104 appearances. But the numbers are only one side of the story, the other one is his political engagement. He often took the chance to speak out for peace in his country, whether it was during the World Cup’s qualifiers in 2005 or after winning against Benin in 2009. Furthermore, in 2011 Drogba was named a member of the truth and reconciliation commission that was established to ease the country’s divide. Outside his country, he became UNDP Goodwill Ambassador in 2007 to help raise awareness of development changes in Africa and around the world. He also supports the UN Sustainable Development goals to eradicate poverty and end climate change. He joined the NGO Peace and Sport as Vice-President and leads the Drogba Foundation.

Didier Drogba has scored the most goals for his country while contributing to off-the-pitch issues and he was also very successful during his club career.

Educators could look at the life story of Fergus Sutter and work with young people to consider this question:

Football player who helped his country of origin find peace.

Next
Animals of Football