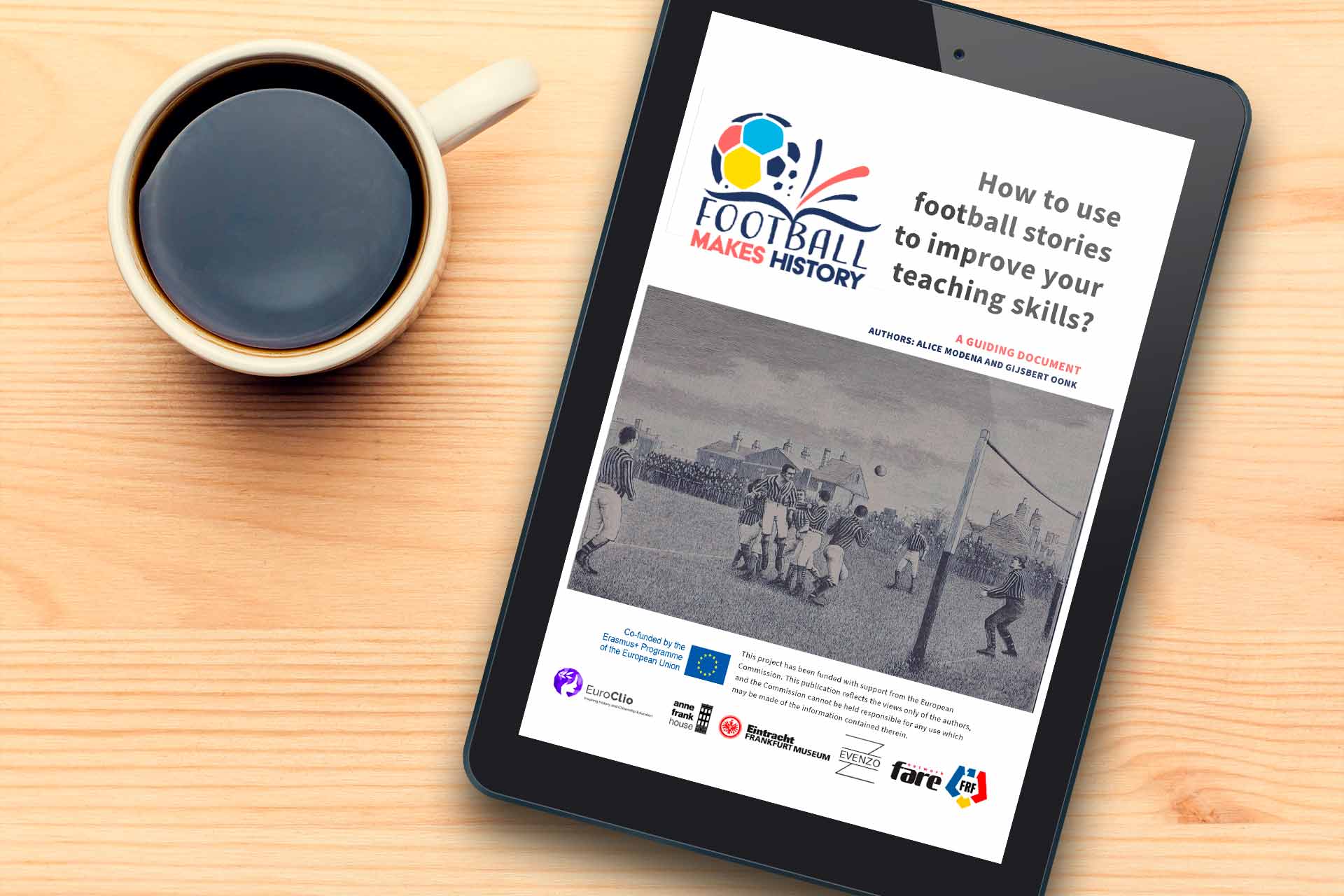 How to use football stories to improve your teaching skills?

Translating football stories into education is fun. Sport – and particularly football – appeals to millions of Europeans, regardless of their sexual orientation, colour, gender, age, nationality or religion, often becoming a defining factor of identities and communities. The rich local cultural heritage of football and its shared history covering the turbulent 20th century history offers direct access to addressing past and present diversity. In addition, it helps to promote shared values, equality, non-discrimination and social inclusion with an integrated perspective, encompassing and innovating formal and non-formal learning, as well as youth work.

European Football stories can not only excite the football and history fans but in particular create a space where those that are marginalised in European societies are included, feel belonging so that everybody can seek active citizenship. In short, we have developed new educational resources that can help young people explore European history and heritage through the lens of football, as well as use football to tackle social exclusion.

To mention just three examples. First, most young football lovers have heard of the famous football clash between Barcelona and Real Madrid in Spain. But very few know why this match is labelled ‘el clasico’.
At a quick glance (sometimes even just a quick google-search) it becomes clear for students this clash originated in Spanish and Catalan nationalism and their historical context. Therefore, to grasp the basic notions of this background students have to dive in the history of Spain. They explore the nationalist historical narratives between the Kingdom of Spain and region of Catalunya. They might discuss the link between sport rivalry and nationalism and last but not least -they may relate their findings with similar and different examples from their own or other countries.
In a second learning activity we ask students to look at the football squad of countries like French, the Netherlands and England. They are requested to find out where the players and the (grand) parents(parents) of these squads are born. If they do this for the French World champions of 2018, they will find out that quite a few players have a background was part of the French empire. In the end, they are able to define the major French colonies and when they were colonized? They also will discover that some players have a background as part of the labour- migration history of that country. Therefore, at the end of the exercise they have debated differences and similarities between colonial migration and labour migration in the context of national identities.

In the final and third example that we like to mention here we build on the increasing popularity of women’s football. Since World War II, women have attained higher levels of education, increased their time in the paid job market, and made significant inroads in the worlds of work and politics, but there are still injustices that remain.

This learning activity introduces students to women’s efforts to receive equal pay and better working conditions through football in the struggle against sexism and gender discrimination.

In this learning activity students have to demonstrate awareness of sexism and stereotypes that influence institutionalized gender discrimination. They learn how about the gender pay gap and how it manifests in women’s football. They learn how women have fought and are still fighting for pay equity and workplace equality in sports and they reflect on methods to overcome the gender pay gap.

In short, in this project we have looked at issues of racism, gender & sexism, homophobia, migration, poverty & inequality, nationalism, war & peace – all through the lens of the world’s most popular game! The shared football history of Europe can generate a sense of belonging and ultimately sense of responsibility for active citizenship, especially for young people who are not normally interested in school or history. The rich history of football makes it possible to build positive cultural contribution to diverse society. The project addresses societal challenges through the transformational potential of football and its history. Its main goal is to keep inclusive education at the forefront, aiming to help young people explore European history and heritage through the lens of football to tackle social exclusion. This was achieved through collaborative design work and piloting.

We have produced historical content and educational resources for use on the Historiana website. The ready-made and transferable learning activities on European football history are designed to help tackle rising intolerance and engage students in critical thinking. Among others you’ll find, lesson plans exploring sometimes overlapping themes like nationalism and the links to armed conflicts, borders and national identities, football and identity markers, and economic inequalities. Most of the educational material is developed for the age group from 14-18 years. More often than not, this can be easily adjusted to somewhat higher and lower age group.