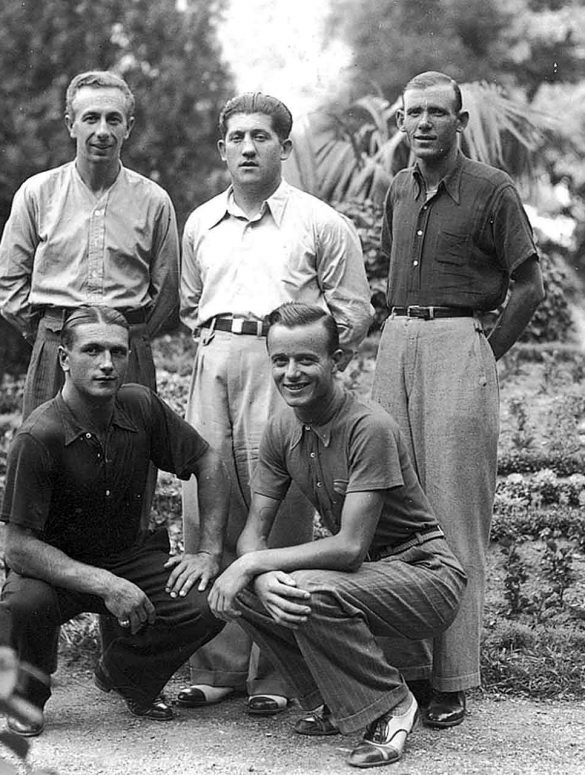 Ignaz Feldmann was born in 1901 in Przemysl in eastern Poland, then part of Austria-Hungary. During and after the First World War, Jewish families like his own were subjected to antisemitism and pogroms. In 1920 Ignaz moved to Vienna to find work. He married twice and started a family with his second wife, Sabine. In 1926, his talent for football enabled Ignaz to begin a career as a professional player with FC Hakoah Wien, the leading Jewish football club in Austria.

Hakoah Wien was one of the great clubs in Central Europe, with thousands of loyal fans, great players like Bela Guttmann and capable administrators like Fritz Löhner-Beda. A tough central defender, Ignaz became team captain. Hakoah won many trophies in Austria and also established an international reputation. The team made numerous tours abroad, including the United States, and established a worldwide fanbase. But the club faced intense anti-Jewish pressures in the 1930s. After the Anschluss in April 1938, Hakoah was forced to disband. After Kristallnacht in November 1938, Ignaz took refuge in The Netherlands.

Ignaz was placed in the Central Refugee Camp at Westerbork. In 1940, however, The Netherlands fell under German occupation, placing Ignaz in danger once again, though he managed to avoid deportation until 1944, partly because he played a lead role in organising football competitions for the inmates of the camp. But in September 1944, Ignaz was deported to Terezin near Prague. From there he was sent to Auschwitz-Birkenau. Ignaz might have been killed there but for being recognised by an SS officer who remembered him as a footballer. In 1945 Ignaz made forced marches westwards to other concentration camps. He was liberated at Ordruf-Buchenwald and acted as a guide for Allied commanders inspecting the camps, including the then Allied Commander in Chief Eisenhower. After the war, Ignaz discovered the fate of his wife and children. They had been deported from Vienna to the Maly Trostenests camp near Minsk on June 9, 1942, and were killed immediately upon arrival. He moved back to Vienna where he died in 1964.

Ignaz Feldmann was a fine footballer for an important football club. He was a key defender and team captain for Hakoah Wien from 1926 to 1938.

Feldmann’s football skills influenced what happened to him in internment camps during the Second World War; perhaps they even saved his life. So the story of Ignaz Feldmann is about much more than football.

Educators could explore this life story with their students and inquire:

This is a lifestory is made possible thanks to Bas Kortholt from Herinneringscentrum Kamp Westerbork.

Previous
Competing for more than goals

Next
Panenka and Penalty Pressures