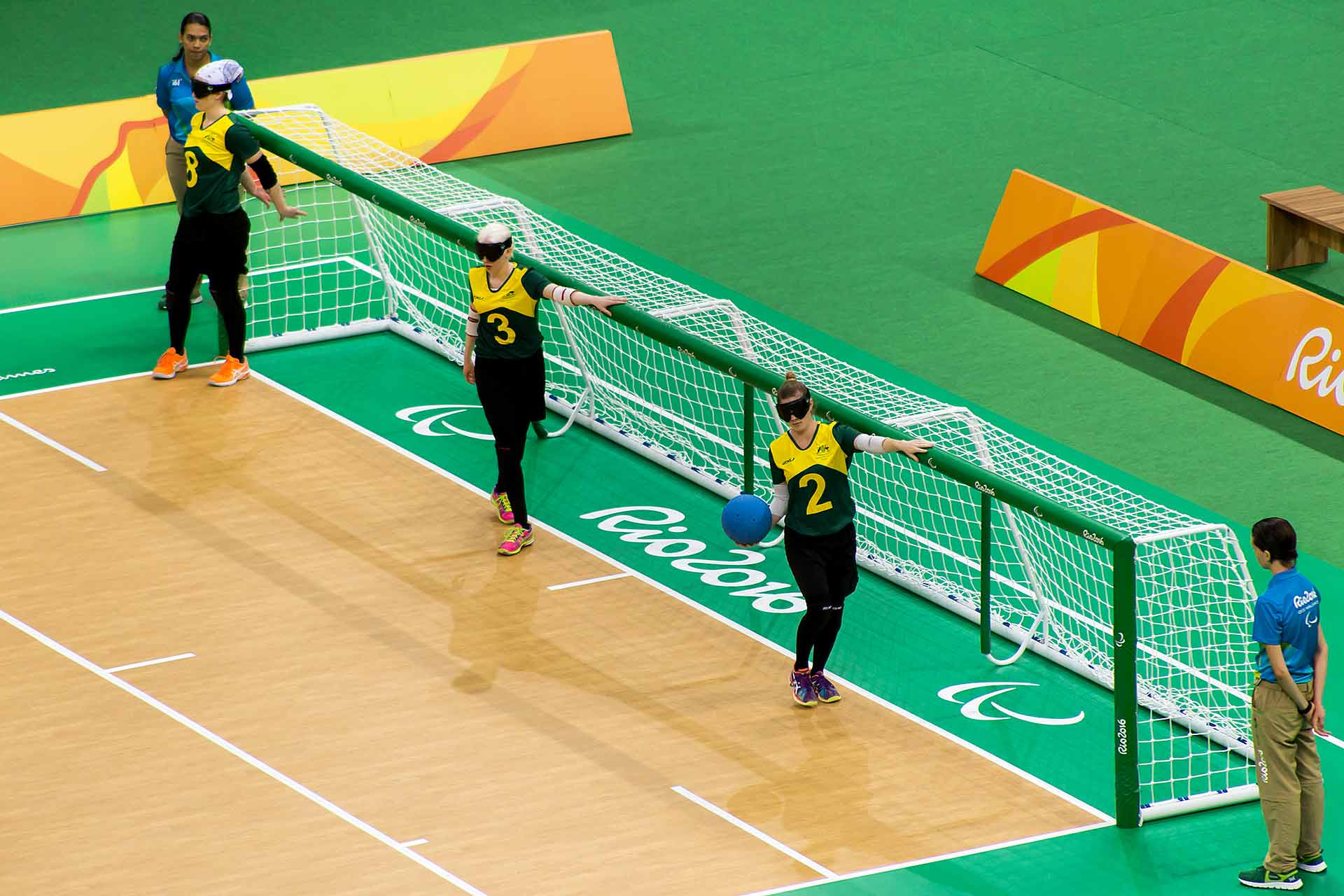 When the ball can be heard

How do you play football when you can't see?

Home
Stories
On This Day
When the ball can be heard

Football has inspired the masses for over a century. Among them, of course, people with disabilities as enthusiastic fans, but also as players! But what is the game like when the sense that is crucial to football is impaired? How do you play football when you can’t see?

As explained in a newspaper:

The ball with which the youngsters play the game is made of wire, and the inside is fitted with bells, so that wherever the oval goes it can be followed by the sound. The goal posts are flags, upon which are also a number of bells, and it was very rare for the boys either to lose the ball or to kick in a wrong direction. They enjoyed the fun immensely, and when a goal was made. Scoring it was the signal for loud cheers.

In 1946 Hans Laurenzen and Sett Randlem invented Goalball, a game for visually impaired and blind people. The games take place on a field 9 meters wide and 18 meters long (like volleyball), whose markings are tactile. The teams consist of three players and three substitutes, who have to shoot the ball, which weighs 1.25 kg, measures 76 cm and is filled with bells, into the goal. The goal extends over the entire width of the game of 9 metres. After a toss, the game is played twice for 12 minutes, interrupted by a three-minute half-time break or timeouts.

Blind football is much older

The newspaper quote from above is not from the late 1940s or the 1950s, but over half a century older! The description stems from the Lancashire Daily who described a football match played on 24 May 1873 by a couple of blind students of the Royal Victoria Blind Asylum in Newcastle. Roughly speaking, there are only a few differences between this game and goalball, because the bells in the ball are the deciding factor. However, there are some rules in goalball that make the game fairer and prevent time play.

When the rules were blurry

And, admittedly, it stands to reason that the game quoted was a rugby game in the modern sense of the word. Finally, an oval ball is described. But we cannot be absolutely sure, because in the 1860s and 1870s there was not such a clear distinction as there is today. In this early football, the variants of playing football were diverse. There were many teams that played according to their own rules, because there were many regional Football Associations (FAs). If teams with different sets of rules played against each other, they had to agree before the game. Did they only play according to the rules of one team? Or did they change the rules at half-time? Or did they mix both sets of rules into a completely new one? There were also teams that played according to association football rules, but used an oval ball. Maybe there was no round ball available.

Football for rehabilitation of veterans

Laurenzen and Randlem founded goalball as a sports-based rehabilitation program for blind veterans of the Second World War. Similar support programs were already in place after World War I. In England, after the First World War, there were many charity games to raise funds for the armed forces that had become disabled due to military actions during the war. But there were not only games for severely wounded veterans, but also games with them. They were not blind, but they were men who had lost their arms in the war. In 1917, female football players organised a charity match for them to collect donations, where they played against the disabled men. However, there were apparently not the same number of armless men, which is why other former soldiers also took part, but had their arms bandaged behind their backs. Football was a therapy for recovery even after the First World War.

Goalball is a top level sport

On August 4, 1976, goalball was introduced as a new men’s sport at the Paralympics in Toronto, Canada, and has been played at all Paralympic Games since then. In addition, since 1978 a Men’s World Championship has been held every four years (always two years after the Paralympic Games). It is not surprising in football that it was initially only played by men at the top level. But at least since 1984 women’s goalball has also been a Paralympic sport.

Find out more about Goalball at the Tokyo 2020 Olympics. The official Paralympics youtube channel provides more detailed information about Goalball.

On this day in 1946 Hans Laurenzen and Sett Randlem pioneered Goalball. But football for the visually impaired has older historical roots.

A plea for inclusion