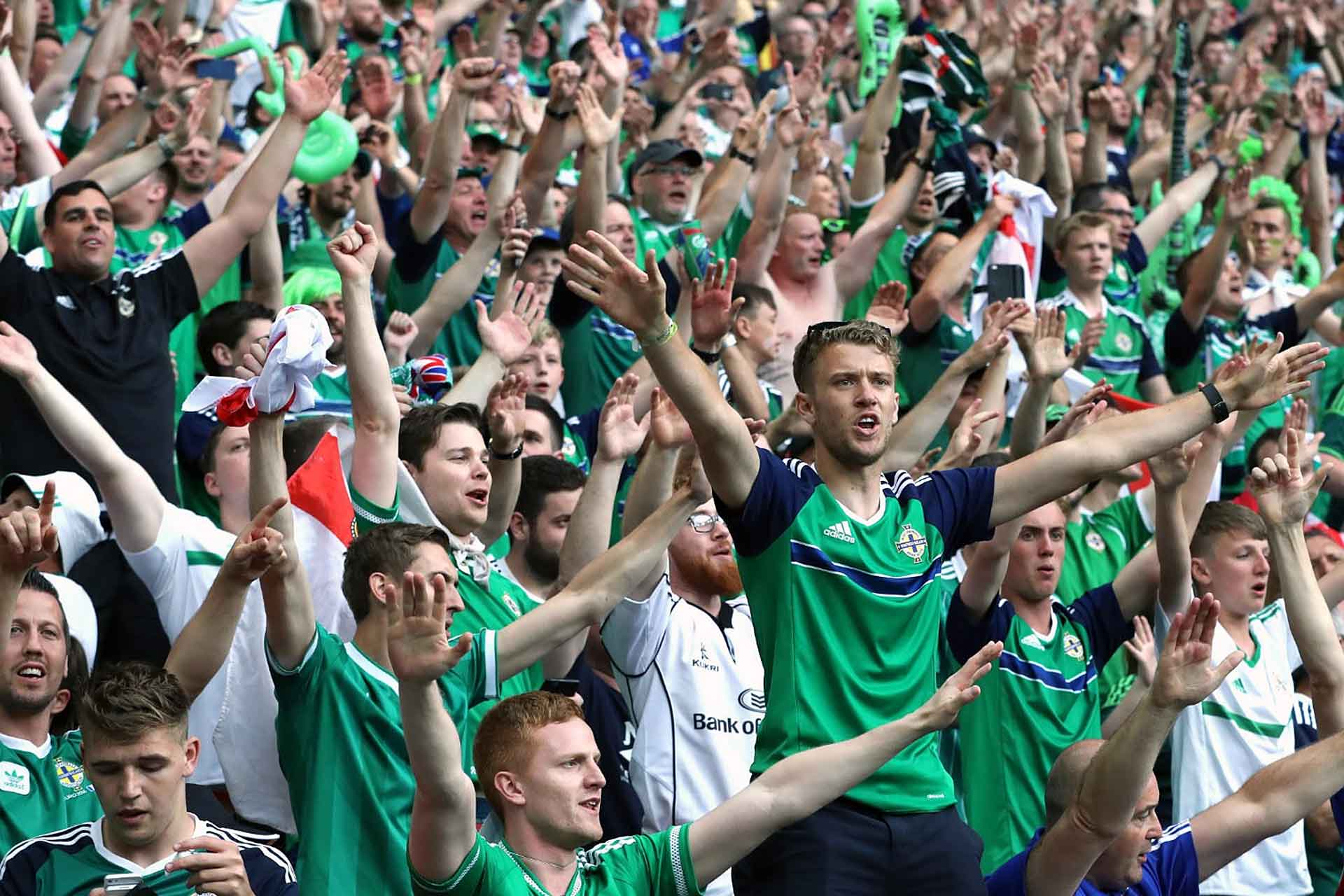 When fans sing together for joy

A medal for exemplar behaviour

Home
Stories
On This Day
When fans sing together for joy

Today in 2016, Northern Irish and Irish fans received the Medal of the City of Paris for exemplary behaviour. The Grand Vermeil, which is regarded as Paris’ most prestigious honour and has been awarded to a variety of cultural and political figures.

An important moment for the countries, as well as in the history of the European Nations Cup. Why is this a significant achievement?

Love songs in the streets of Paris

During the European Championships in 2016 hosted by France, the fans of Northern Ireland and the Republic of Ireland received the Medal of the City of Paris from the Mayor of Paris for their “exemplary sportsmanship”. Ms Hidalgo said, “Thanks to the Irish Fans, we have seen extraordinary things since the beginning of the Euro Competition.  We’ve seen love songs in the streets, we’ve seen baby songs in the Metro and we’ve seen policemen singing with the Green Army.  We’ve heard – so many times – the great fire of “Will Grigg” in our stadiums.”

Light against a darker past

This was a tremendously significant moment as it recognised both sets of fans at the same time. It was symbolic of a sea change in fan behaviour.  The behaviour of Northern Ireland fans during what became known as the infamous “night in November” in 1993 was one dark point in the history of matches between the two nations. That high stakes game was played amidst the background of horrific sectarian violence on the streets and abusive chants from sections of the crowd.  The match was the last game in the qualification campaign and the Republic of Ireland was aiming for a World Cup spot.  There were doubts about if the match, which was set to be played at Windsor Park (Belfast), was to be played at all given that 23 people had died in a series of bombings and shootings in the month before and significant security measures had to be put in place before the match. The atmosphere was hostile and Jack Charlton noted that he had never encountered a more hostile atmosphere.  In the match itself, Northern Ireland took the lead in the 71st minute through a Jimmy Quinn volley, substitute McLoughlin equalized in the 76th minute with a goal that would see the Republic and Spain qualify for the World Cup.  There were reports of sectarian behaviour and chanting from sections of the Northern Ireland fans.

When further incidents occurred, such as the “Neil Lennon incident” where Neil Lennon (Northern Ireland) received a death threat from groups in Northern Ireland ahead of a friendly international against Cyprus in 2002, there were further questions asked about Northern Ireland fan behaviour.  Lennon had also been booed when he appeared for Northern Ireland against Norway in February 2001.  Lennon decided to call it quits and never played for the Northern Ireland team again.  Lennon noted, “I can’t put my family through this every time.  It’s a real pity that it had to end like this.”

Michael Boyd had already got the job as the Head of Community Relations at the Irish Football Association (IFA), the Football Association of Northern Ireland, in February 2000 and he set out to transform Northern Ireland fan behaviour through a partnership with the fans themselves.  He launched the Football for All strategy and attempted to create a fun, safe and inclusive football environment while also inviting the Amalgamation of NI Supporters’ Clubs into discussions on how to encourage fans to police poor behaviour at matches. This also included encouraging a “Sea of Green” at Northern Ireland matches and replacing sectarian songs with, “We’re not Brazil, We’re Northern Ireland.”

These initiatives ran from 2003 right through to the Euros in 2016, with the Northern Ireland fans receiving the UEFA backed Brussels International Supporters’ award (now called European supporters award) in 2006 for tackling sectarianism and their work supporting charities. The “Sea of Green” initiative was launched and the atmosphere at home matches was changing, while at the same time Northern Ireland fans dared to dream as they arrived at the Euros in 2016, their first major tournament performance in thirty years.

With compliments from the singer

Given the history between the two nations, it was a great moment that both sets of fans were awarded for their exemplary behaviour. While Northern Ireland fans were rewarded for their stadium enthusiasm chanting, “Will Grigg’s on fire, your defence is terrified,” Republic of Ireland fans were rewarded for some memorable moments outside the stadiums.  Gala Rizzatto, the Milan-born singer that penned Freed from Desire noted, “I don’t have a team but I’ve always liked the underdog.  So when Northern Ireland came up with the song, I was really happy because I’d heard they’d never qualified for the Euros before.  The fact that they were also the underdog and they’d made it through, it was so nice and fitting for my song.’

On this day in 2016, Northern Irish and Irish fans received a medal for exemplar behaviour. An important moment for the countries, as well as in the history of the European Nations Cup. This is the story of the remarkable fans of Northern Ireland and Ireland. It is a story about football innovation and bridging countries.

Next
July in football history