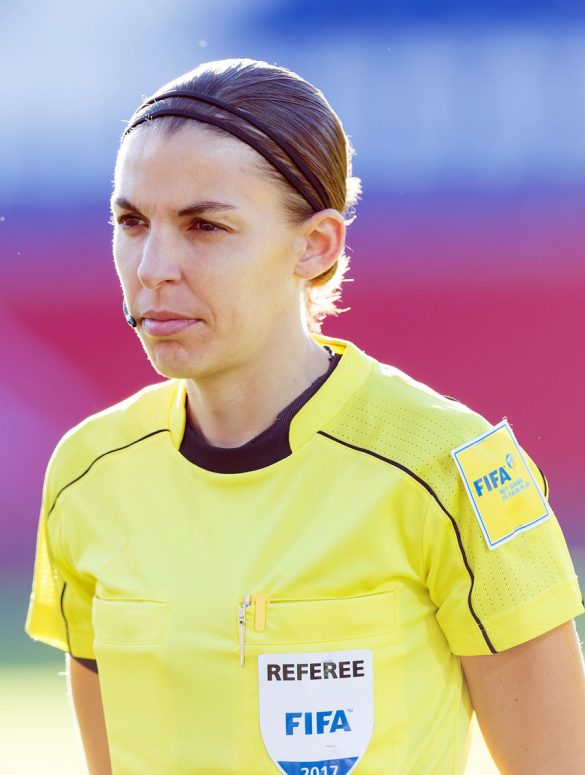 Whistling on the Big Stage

Stephanie Frappart was born in 1983. She started refereeing at a young age; by the age of 26, she was on the FIFA International Referees List and has been there ever since. She controlled men’s matches from 2011, in France’s Championnat National. In 2014 Stephanie was promoted to Ligue 2, the second-highest level in France. In 2015, she was a referee at the Women’s World Cup in Canada.

In 2019 Stephanie Frappart reached the top as a referee. In April, she was the first woman to take a men’s Ligue 1 match (Amiens – Racing Strasbourg); in July she refereed the Women’s World Cup final in Paris between the Netherlands and the United States. In August, she was chosen to referee the UEFA Super Cup final in Istanbul, between Liverpool and Chelsea. In the glare of worldwide TV coverage, Stephanie and her assistants controlled a high-intensity match with complete success.

After controlling the 2019 Super Cup final, Stephanie Rappart refereed another key men’s match in November 2019, the first All-Ireland Champions Cup between Dundalk of the League of Ireland and Linfield, champions of Northern Ireland. The question that remains is: What Happens Next? Will Stephanie and other referees, such as Bibiana Steinhaus lead the way to full equality?

In the 21st century, women’s football has gained public attention and acceptance. The 2019 World Cup got crowds and huge media coverage.

Educators could look at the life story of Stephanie Frappart and work with young people to consider these questions:

Find out more about Stephanie Frappart here. Also, read this Guardian article about her refereeing the match between Liverpool and Chelsea.

The rise of female referees in professional men’s football