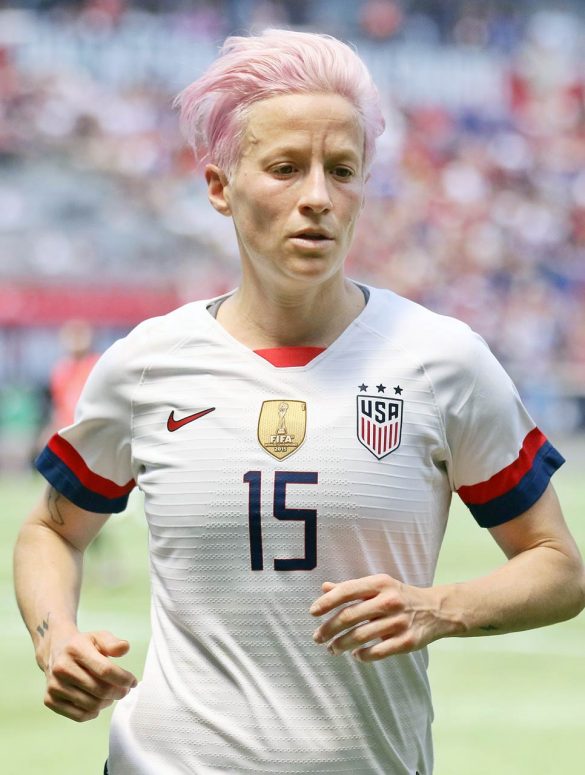 Megan Rapinoe was born in California in 1985; it is said she began playing football aged 3 because she idolised her older brother. By the age of 17, she was playing in the Women’s Premier Soccer League. Megan went to the University of Portland on a sports scholarship. A clever winger who scored lots of goals, Megan was first chosen for the US national team in 2006.

After serious knee injuries, Megan Rapinoe returned to the USA team in 2009 and has been a key player ever since. The USA team reached the Women’s World Cup final in 2011, won gold at the London Olympics in 2012, and won the World Cup in 2015. Megan also starred for her clubs, Olympique Lyonnais and Seattle Reign. Megan captained the USA team that won the World Cup final in 2019. She was named Player of the Match. Megan Rapinoe was awarded the Ballon d’Or Feminin for 2019.

Megan Rapinoe achieved both fame and blame in her great year of 2019. She was admired as a role model for women and girls. She also drew hate speech on social media against her same-sex relationship with basketball star Sue Bird, and her “war of words” on Twitter against US President Donald Trump. Many observers accused Megan of using her sporting fame to “interfere in politics”.

Women’s football made a breakthrough in 2019, seizing public attention as the World Cup in France attracted big crowds and more media coverage than ever before. Megan Rapinoe was the ‘face of women’s football’ as the captain of the dominant US team. But this was accompanied by controversy.

Educators could look at the life story of Megan Rapinoe and work with young people to consider these questions:

Watch here reaction to winning the Ballon D’Or Feminin. Or read this article about her.