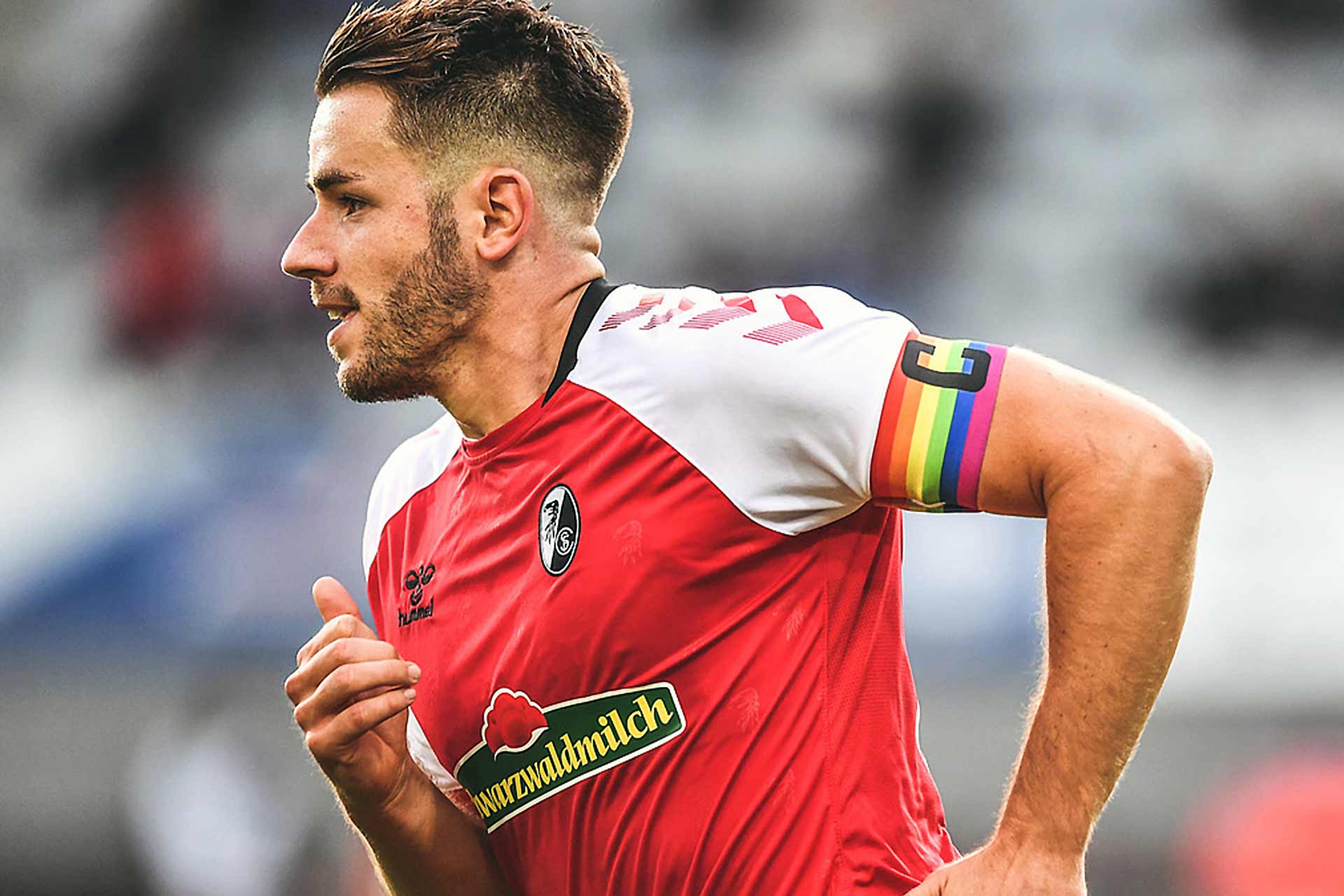 Three captain's armbands with a message

Home
Stories
Big statements on a small piece of cloth

There is debate about the origins of the captain’s armband. Functionally, it was meant as a quick way of identifying the captain, making life a bit easier for referees when they had to tell off a whole team or communicate with their representative during the game. The armband allegedly made its appearance somewhere in the late 1940’s in Italy, and it quickly spread across the globe. Though FIFA rules forbid any kind of political statement to be made through the captain’s armband, special armbands with political or identitarian messages keep popping up in stadiums around the world. Here’s three iconic armbands that came to rattle football’s status quo (and some extras!).

The rainbow armband in Germany

The rainbow armband got a lot of attention in the summer of 2021 when Manuel Neuer wore it during pride months for Germany’s group games in the European 2020 Championship. Following this game, a formal investigation was started by the UEFA as the official rules prohibit any kind of political statements from players and team.

Finally in January 2021 the club officially announced that all team captains within the club would be wearing the rainbow armband exclusively. Included in the announcement was the hashtag #NieWieder (German for ‘Never again’) which represents a initiative in German football which organises a remembrance day every January to remember the victims of the Holocaust and to take a stand against discrimination. Head coach of the SC Freiburg, Christian Streich, supported his captain early on explaining to the press in 2020 he is wearing the armband because he believes in the cause. Other teams in the Bundesliga wearing the rainbow armband include the VfL Wolfsburg who have worn the band since 2018.

A shocking state of affairs

The FC Groningen, from the Dutch north, was proud to celebrate its 50th anniversary in 2021. There was much to be grateful for. From their creation, they have managed to become a regular fixture in the Dutch first division, to produce or to give a platform to a few legendary players such as Arjen Robben, Luis Suárez or most recently Virgil van Dijk, and, as a crowning achievement, they have obtained the 2015 KNVB Cup. Sadly though, their region has been struggling with a decades-long problem that simply refuses to go away. Groningen is home to Europe’s largest gas field. The gas extraction has brought energy and prosperity to many, but also brought ground soil subsidence and earthquakes to the region. This has damaged houses, decreased property values, and caused psychological and emotional damage to the population. The captain of the Pride of the North, to show solidarity with the people of their province, wears a special earthquake armband to protest whenever sizable earthquakes occur, or when the political discussion around stopping gas extraction or not gets particularly heated.

A question of identity

Francisco Franco, the Spanish Caudillo who ruled Spain for almost forty years, died in 1975. This ended a painful period in Spanish history, and left oppressed groups feeling relieved. One of these groups were the Catalan nationalists, traditional opponents of the Franco regime. Once he was dead, a transition towards democracy took place, giving liberal and regionalists ideas space to flourish. In 1975, FC Barcelona instated Catalan as the club’s official language, and allowed the banned Catalan flag into their stadium. On February 1st 1976, Johan Cruyff sported a captain’s armband with the colours of the Catalan flag for the first time, in the fixture against Athletic Club from the Basque country, another autonomous, traditionally anti-Franco region.

Thinking points: what is the role of the captain?

There are many more examples of famous armbands with a message. River Plate captain Leo Ponzio wore a special Maradona themed band to honour Diego after his passing – a gesture replicated all around the Argentinian league. Ghanian legend and all time top scorer of the national team Asamoah Gyan decided to honour a very special person with his custom armband: himself. Gigi Buffon also frequently used distinctive custom armbands. Though officially not allowed, these pieces of fabric can tell a story and bring interesting questions to the fore: who does the captain represent? Himself, his team, all fans? Can political statements on armbands be exclusionary? What do they communicate to those who do not share the cause? And how can we make sure that armbands and the messages on them remain a force for good?

Have a read through FC Barcelona’s recap of the Cruyff action. Read more about the armband policy of Saint Pauli.

Activism on the pitch has many faces. Here are some team captains who wear their colours on their armbands.

Previous
Time Travel to the European Championship of 1454

Next
The rise and fall of a club as community drama