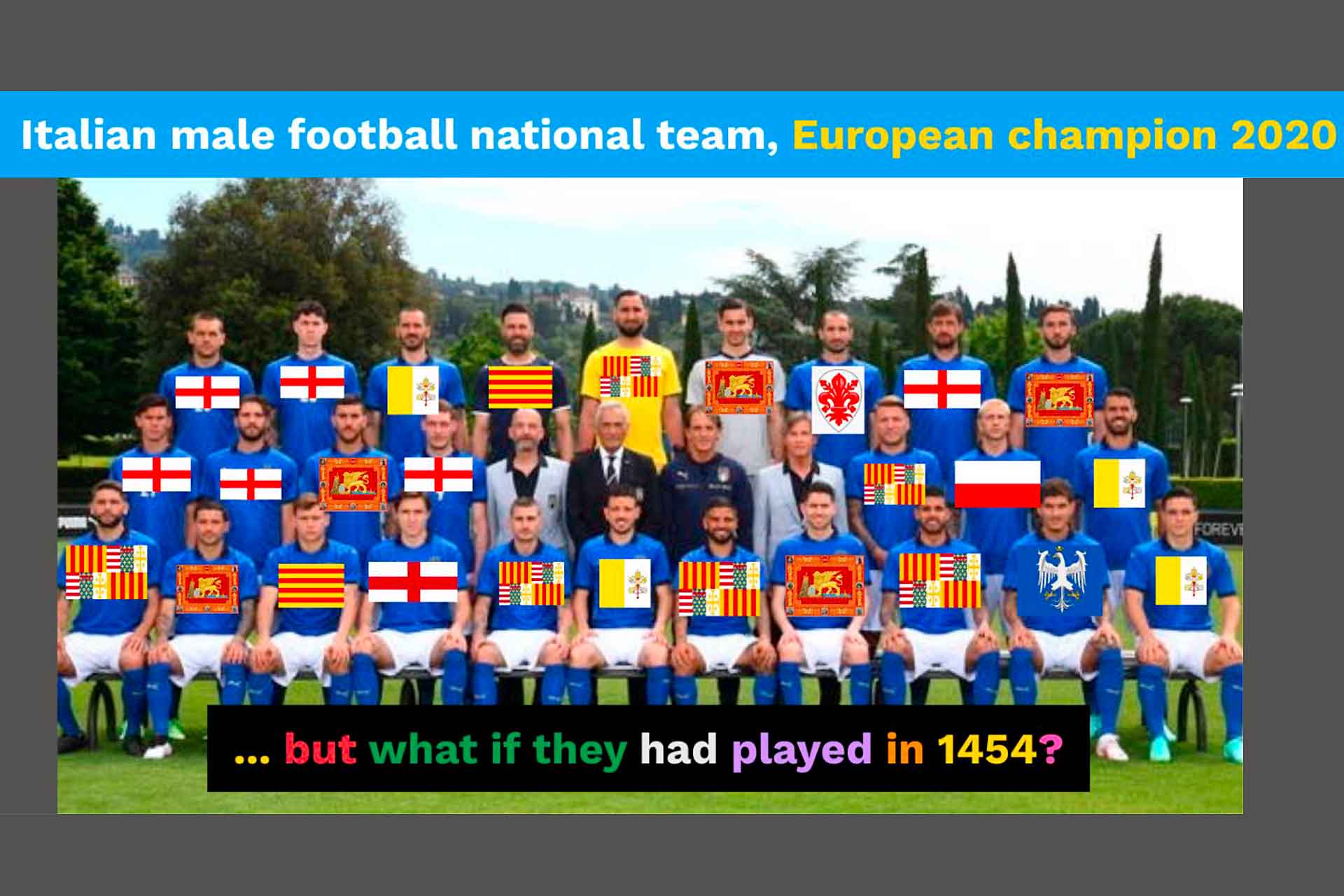 Time Travel to the European Championship of 1454

Football can be used as a language to explore the past

Home
Stories
Time Travel to the European Championship of 1454

Grabbing the attention of pre-adolescent kids when you’re talking about the XVth century political situation in the Italic boot is not so easy.

What is now a unified Republic (San Marino and Vatican State citizens may excuse us) has been the battlefield of medium and small-sized states, formally independent but usually under the protection of some more powerful European nation, in a constant struggle for local supremacy, through wars, alliances and betrayals, up to XIXth century.

Students usually get confused when they have to remember just the name of the states, and only the very motivated ones can explain some part of the alliance game, of the aristocratic families’ relationships, and who fought against whom in that year.

With help from the FMH community

And this is when Football Makes History project comes to help, with the very smart learning activity Grasping the concept of identity with time-traveling football tournaments, developed by Icelandic teacher Stefán Svavarsson, in which current players are taken in a travel through time to discover in which national team would have played if they had born in the middle of XIXth century, or at the end of it. “In 1878 Lewandowski would have played for Russia”, says the presentation of the activity. So what about the current European champions, where would they have played after an almost six-centuries-travel back in time to 1454? And why in that year, somebody could ask… The answer to this latter question is because in that year, after the diffused fear of the Ottomans, new rulers of Constantinople, Italic states signed a treaty (the so called “Peace of Lodi”) which preserved the peninsula from the wars for almost 40 years, really not so common in that age.

The students have to answer the first question, with the help of some maps. Italian players and their origins are brought back to the end of Middle Age, to discover in which one of the several regional states they would have played. Could it be the Duke of Milan, or the Republic of Venice? The Papal states or the Kingdom of Naples? Or maybe some smaller duchy, like Lucca or Modena and Ferrara? Which one of those states would have been the stronger, footbally speaking? Fixing the names of the many Middle and Modern Age Italian states in the memory is not that easy, and using the birthplaces of known football players to replace them in the past can be a sort of help.

What did the students think?!

But how was the activity for the students? The work was kept in the Vado-Monzuno Comprehensive School, on the southern mountains of Bologna, and the students were all between 12 and 13 years old. The reactions were various: “The activity was more amusing than the usual history lessons, and I’ve learned the existence of some states of 1454” (Eleonora); “The activity was different because usually we don’t use the computer lab for history lessons” (Tommaso); “It was funny to learn better about middle age Italian states through the faces of the football players that i followed last summer in the Euro tournament!” (Luca); “I’ve learnt a lot of things about football, because usually I’m not very interested in it, and I also discovered some Italian states of XVth century” (Nina); “I had the occasion of seeing the pictures of football players that i didn’t’ know, while everything about history was already clear into my mind” (Luca); “Actually I don’t think I’ve learnt so much…” (Elia).

So, probably the use of pc instead of the handbook was the most thrilling thing for the kids, and some of them declared they are not so fans of it anyway. But the different type of work was noticed by everyone in the class, and it was surely something that broke the weekly routine, and maybe made history sound a little more pop and friendly.

Italian history teacher adapted a lesson plan made in Iceland and took it several centuries back.

Next
Big statements on a small piece of cloth