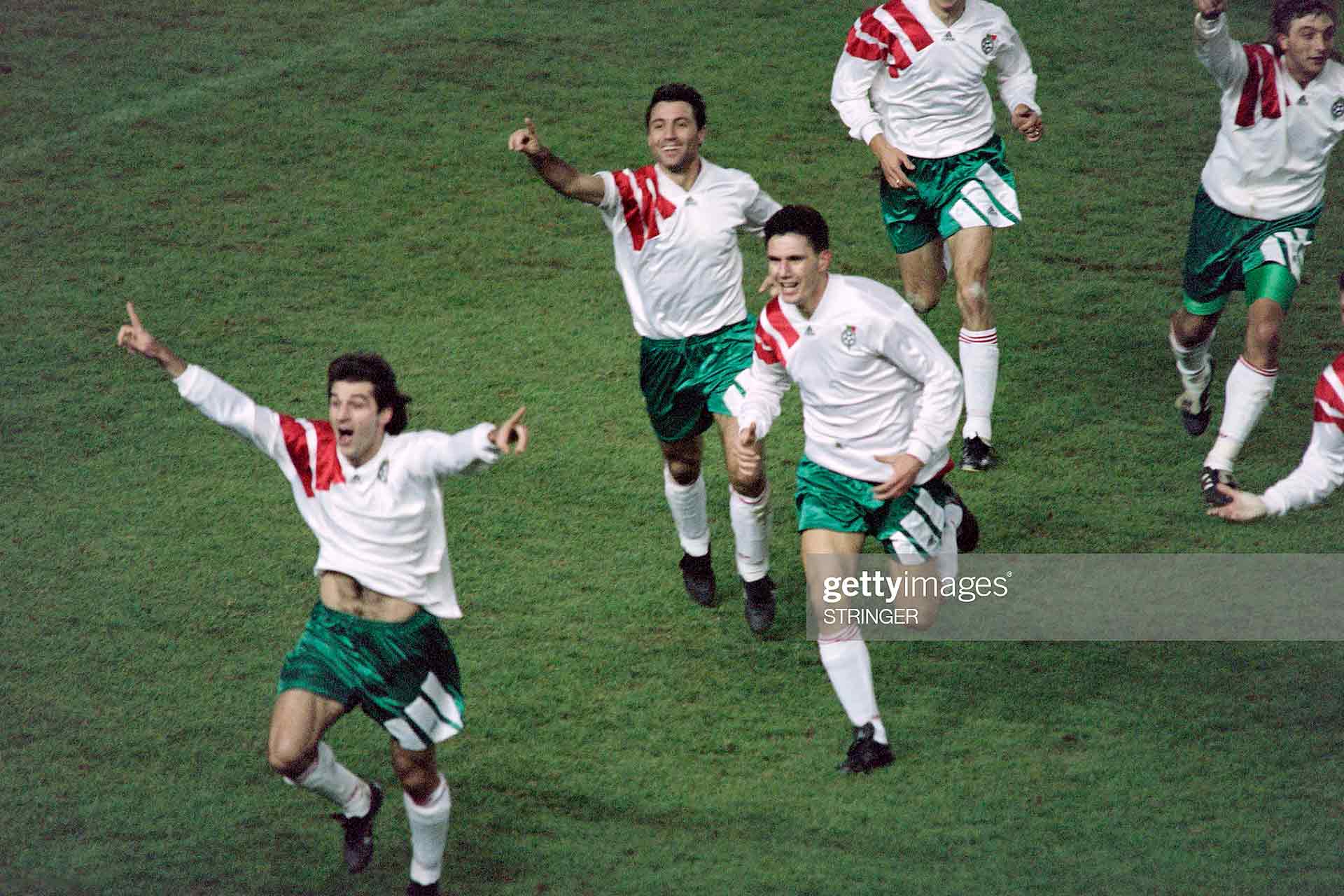 Emil Kostadinov celebrating the victory after the France-Bulgaria match in November 1993 (Photo: Getty Images).
On This Day
·November 17, 2021·4 min read

When God was Bulgarian

A match in 1993 which upset one nation and thrilled another

Home
Stories
On This Day
When God was Bulgarian

Ralitsa Angelova is a trainee at EuroClio from Bulgaria, and has recently joined Football Makes History. In this article she narrates a little historical investigation around a particular football match from 1993. Read her story below.

In the beginning, there was…

A couple of weeks ago, I discussed with one of my French friends about the football situation in France and Bulgaria. I voiced that many people find Bulgarian football in a deplorable state. Many Bulgarians still feel strong nostalgia for when Bulgarian football was perceived on the global stage to be of high quality. Many Bulgarian football maniacs still cherish the memory of a grandiose goal by Georgi Asparuhov (known by the sobriquet ‘Gundi’), who as per an article in The Guardian, ‘stunned England at Webley’. Asparuhov scored his celebrated goal against England at Webley in December 1968. Bulgarian victory was widely celebrated in the homeland. Unfortunately, such glorious football heights are now in the past. Bulgaria does not have much to gloat (well, boast) about.

My interlocutor interrupted me and said that the Bulgarians, in fact, left a deep mark on the French people. This left me perplexed because I have never heard of Bulgarians doing something like this to the French. My friend then told me about the France-Bulgaria 1993 football game, which left an unhealed wound in the French people’s hearts.

A Twist of Fate

On 17 November 1993, Bulgaria and France met at Parc de Princes in Paris to decide their fates. This match had salient importance for both parties. The winner of the match would qualify for the World Cup 1994 in the USA. A lot was at stake. The French team (‘the Blue’) believed that the outcome would be in their favour. The Blue believed that the match would be an easy one. But all of a sudden, the tables had turned. In the last minute, or to be more precise, in the last two seconds, the Bulgarian midfielder Emil Kostadinov managed to score again and send Bulgaria to the World Cup. The sudden change of course was a big surprise to many. Especially, when we take into consideration that the French were leading at the beginning of the game. This was a sad night for the French.

And to this day, there are negative sentiments about that match.

After the match, the Bulgarian returned with glory and the French faced humiliation. For the Blue, it was a national drama. The victory day for Bulgaria turned into a mourning day for France. The football coach of the Blue, Gérard Houllier, was very disappointed after the match. He expressed his deep sadness that the team did not qualify for the World Cup. He told the footballers that they are allowed to have regrets but not remorse because everyone worked hard. After this match, Houllier resigned. The couch also did not wait to blame the French attacker David Ginola who made a massive blunder and let Kostadinov take control of the ball and score.

Curious incident. Rooster on the pitch

Many football fans remember this match for one more incident. Out of nowhere, on the pitch, appeared a cocky rooster. Footballers tried to chase him away or catch him, and after a few unsuccessful attempts, they succeeded in driving him out of the pitch. Everyone seemed to be very amused by this ludicrous occurrence.

The Match when Tito Died

The most celebrated Bulgarian football commentator Nikolay Kolev (Michmana), while commenting on the final goal of Kostadinov, said a phrase that has entered the Bulgarian discourse. Kolev triumphantly cried out: ‘God is Bulgarian’. This phrase has since become a part of the dictionary of Bulgarian football. The Bulgarians rejoiced: the victory made them feel like Gods.

The match and the victory of the Bulgarians had a huge impact not only on the self-esteem of the Bulgarian footballers but also on the entire nation. The year after the game, Bulgaria participated in the World Cup where the Bulgarians won against Germany (2:1) and subsequently emerged in fourth place (barely missing to be on the podium).

Perhaps, one of the most important lessons we can all learn is to never underestimate our rivals. Could we say that if the French were more attentive and more dedicated, the outcome might have been a different one? We will never know. But we can clearly see how football unites millions and even brings to light new proverbs. At the same time, it is valuable to consider how football takes particular places in peoples’ living memory.

Previous
Women’s struggle for equality and respect in Football

Next
FC United serves as a mirror