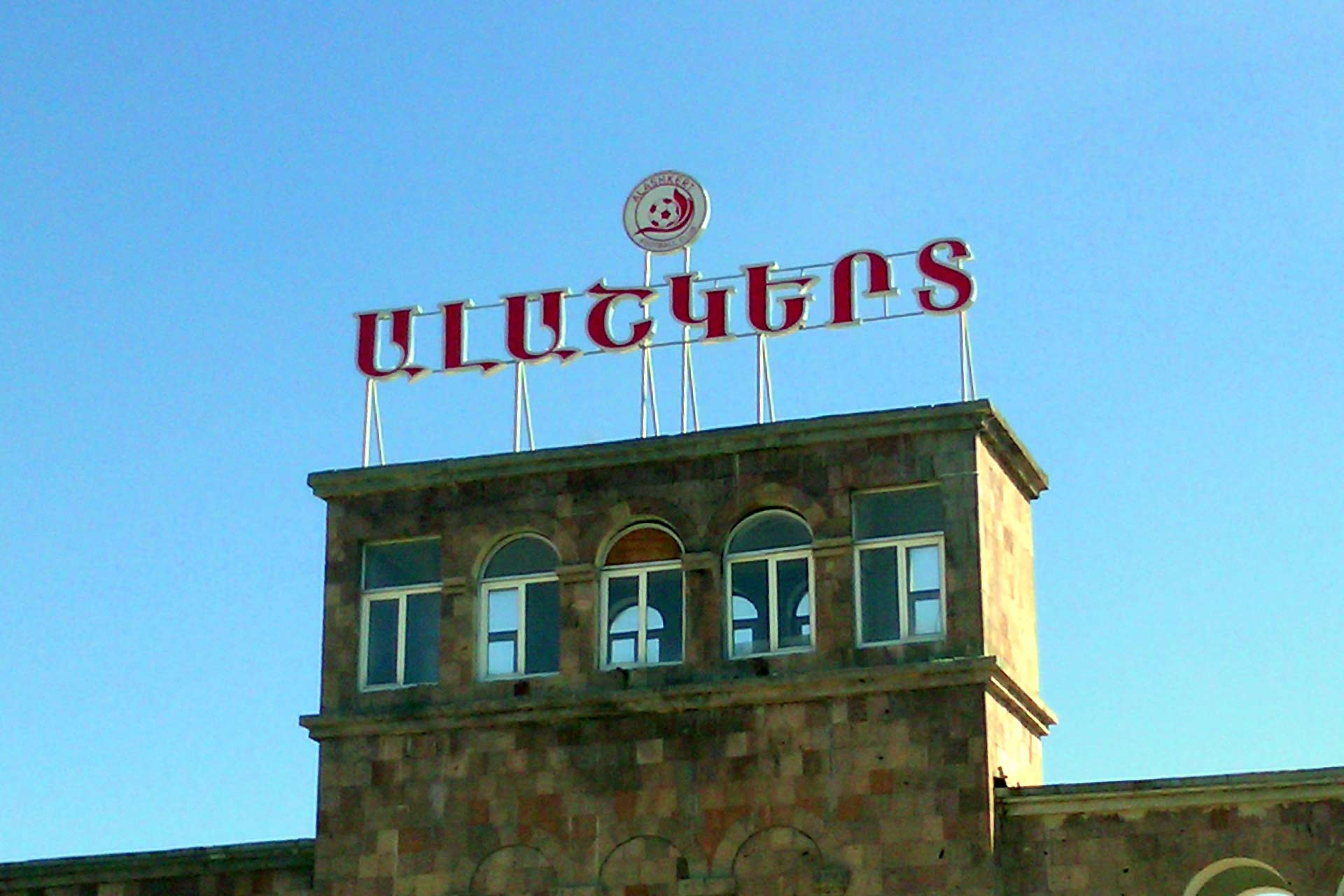 Is it possible for a football club to survive war?

Home
Stories
Far away and/or forgotten? Learning history through the Conference League

This year’s football season has seen the introduction of a new European tournament, the UEFA Europa Conference League. The reason behind the establishment of a new tournament was to give clubs from lower-ranked UEFA member countries a chance to reach the latter stages of a tournament, instead of being knocked out of the qualifying rounds of Champions League and Europa League. 32 teams qualified for the group stages. Looking at the groups and the venues there are several teams who are playing their home games away from what used to be their home. This article will investigate the reasons behind the fact that four of the clubs in the group stages are living in exile, one club is named after a different city than its hometown and why a sixth club and its fans will embark on a trip to their home games that would have been impossible to do for several decades.

In memory of home

In group A we find reigning Armenian champions FC Alashkert. Established in the town of Martuni in 1990, the club relocated to the capital Yerevan in 2013. But the club’s roots can be found in a third place. Originally the team was founded by descendants of survivors of the Armenian Genocide during World War 1 in the Ottoman Empire. Having survived the massacres and the mass deportations of Armenians that took place in the Ottoman Empire during World War 1, a group of refugees from the city of Alashkert, Eleskirt in today’s Turkey, settled in the town of Martuni. FC Aleshkert was named in memory of the place that once had been the founder’s home. In group F there is a team with a story that has similarities with Alashkert’s story. PAOK was founded in Thessaloniki in 1926 by Greek refugees fleeing Constantinople in the aftermath of the Greco-Turkish War. The name PAOK is an abbreviation of Pan-Thessalonian Athletic Club of Constatinopolitans, just as with FC Alashkert the name is linking the club with an identity of a city that has been lost to its members.

Moving away from the mountainous black garden

The story of FC Alashkert could serve as a reminder of the atrocities committed during the last years of the Ottoman Empire, but the story of the Armenian club is also a reminder of one ongoing conflict in Europe. Since the fall of the Soviet Union in 1991 Armenia and its neighbor Azerbaijan have been in disputes over the region named Nagorno-Karabakh, translated into English meaning the mountainous black garden. A dispute that has several times turned into war between the two states, the last one in 2020 with heavy casualties on both sides and over half the population of Nagorno-Karabakh displaced. The history of Conference League participant Qarabag FK is a direct result of the conflict. Founded as Mehsul in 1951 in the Azerbaijani town of Agdam in Nagorno-Karabakh, the club was renamed Qarabag in 1987 to mark its regional identity. A year after the first war over Nagorno-Karabakh broke out. During the war, Agdam was seized by Armenian forces and Qarabag’s coach, Allahverdi Bagarov, died fighting in the war. As a result of the war, Qarabag was forced to move to Baku. The first years in exile in Baku, Qarabag was a club of refugees being forced away as a result of the war.

Today the club is an important part of Azerbaijan’s narrative of the conflict. Backed by private and government investments Qarabag FK have become the dominant force on the domestic scene also breaking through in Europe, reaching the group stage of the Champions League in 2017. Qarabag FK’s success in Europe has given the Azerbaijani government international attention about the conflict over the disputed area and a chance to tell the world about the conflict, at least from an Azerbaijani perspective. The hostile relationship between Azerbaijan and Armenia never gets to be played out on a football pitch. Since 2007 the two countries have been kept apart during competition draws, after the Azerbaijani government refused to let the Armenian national team enter the country in order to play a qualifying match for the Euro 2008.

400 kilometers away from home

The conflict between Armenia and Azerbaijan and Qarabag’s exile could be seen as short-term consequences of the dissolution of the Soviet Union. The fate of Ukrainian side Zorya Luhansk could on the other be seen as a long-term consequence of the fall of the Soviet empire. Zorya has a history that goes back to the early days of the Soviet Union. The team was founded in 1923 by workers from the October Revolution Steam Locomotive Plant. In 1972 the team became Soviet champions under name Zorya Voroshilovgrad, the first club not to originate from a Soviet republic capital to become champions. After Ukraine gained independence and its own football league, Zorya has led an existence as an elevator club, shifting between the three highest divisions. But over the last decade the club’s fortunes on the pitch have shifted, becoming regularly one of the top four clubs in the Ukraine’s Vyscha Liga. Off the pitch the club has not been as fortunate.

Located in the Donbass region, in the eastern parts of Ukraine, both the city of Luhansk and Zorya have suffered heavy losses since the Russo-Ukrainian war broke out in 2014. Luhansk became one of the frontlines in the conflict and Zorya’s Avanhard stadium was bombed. For Zorya it was impossible to continue playing in a war zone. Instead of playing in their native town, the team has led a nomadic existence during the last seven years, playing their home games in both Odessa and Lviv before ending up today in the city of Zaporizhia, 400 kilometres away from Luhansk. With no end of the conflict in sight, only time will tell when Zorya may return to play their home games in Luhansk.

Half a lifetime in exile

Zorya’s exile is short compared to Cypriot side Anorthosis Famagusta, whose fans have waited half a lifetime to return to their home. It was originally founded in the northern town of Famagusta in 1911 with the aim of spreading Greek nationalism and Christian virtues. After the coup against president Makarios III in 1974, Turkey invaded the island. Following the invasion, the north-eastern parts of Cyprus have been under Turkish occupation. As a result, around 200 000 Greek-Cypriots fled to the southern parts of the island, taking the club with them. Relocated in Larnaca, Anorthosis became more than a club for just people from Famagusta, but a symbol for the refugees living in exile and still dreaming of returning to Famagusta.

Through the Berlin Wall – a glimmer of hope

Union Berlin is located in Köpenick in the eastern parts of Berlin and play their home games at Stadion An der Alten Försterei. Because of UEFA regulations the club is not allowed to play at their home ground, because the stadium at the old forester’s house is mainly terraced. This means that Union and their fans will have to embark on a trip through Berlin to the western parts of the German capital and the Olympiastadion to compete in Europe, as the first team from the former East Germany to qualify through the league in almost 30 years. A trip that would have been impossible through the Cold War until the fall of the Berlin Wall and the reunification of Germany. Union Berlin’s journey through the remaining parts of the Berlin wall could serve as a reminder that war and conflicts can be solved in a peaceful way and offer a glimmer of hope to clubs and their fans who live a life in exile, so far away from home.

The stories of these clubs, living in exile, are important parts of the histories of some of the wars and conflicts that are still going on in what we think of as a peaceful part of the world. The fates of these clubs could serve as an introduction to let students know more about the conflicts that have forced the clubs to move away from their homes. They could also be used to start a discussion about what parts of society that survives war, conflict and a life in exile and how people show their identity living in exile.

Next
Football, Colonialism, and Migration