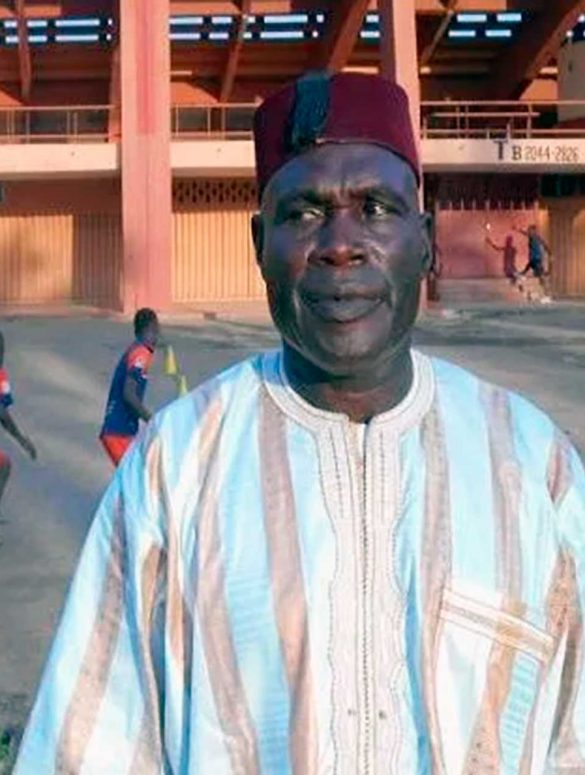 African in the DDR

Chérif Souleymane was born in Conakry, Guinea in October 1944. As a young boy, he was outstandingly good at football. In 1962, when he was 17, Chérif travelled to the DDR (East Germany) as an exchange student on a government scholarship, to study architecture. When playing for his university team at Neubrandenburg, north of Berlin, he was spotted by the coach of the local club and joined SC Neubrandenburg, where he became a local hero, remarkable for his ability and enthusiasm and also seemingly as the only African footballer in the country.

Stranger in a Strange Land

Chérif played two seasons with Neubrandenburg and helped the club win promotion to the Oberliga. But foreigners were at that time barred from playing in the DDR’s top division. Chérif had to move to Neustrelitz, where he scored lots of goals and led the team to second place in the league. Being different was complicated. Chérif was popular with team-mates and the local community because he was a good player with a bubbly personality; but he also had to put up with racism and ignorance because Neubrandenburg was a city where Black people had rarely if ever been seen. “Children used to touch my body to see if I had coal on my skin”, Chérif said in 2021. “It was normal for opposition fans to direct racist chants at me. But I enjoyed playing there because I was well-known in the city and loved by people because I was a good player. I was young but it was a good experience as I never allowed myself to be affected. That was why I kept on scoring goals”. Chérif’s time in the DDR ended after he was selected to play for his national team in the All-African Games in 1965. Guinea’s football authorities told him not to return to Europe but to live and play in Conakry.

Chérif had a brilliant football career in his home country, helping Hafia Conakry to become the best team in Guinea, possibly the best in Africa. Chérif won many trophies and individual awards. In the 1970s, he starred for Hafia as the club reached the finals of the African Club Champions Cup five times, winning three. In 1972, France Football named Chérif African Footballer of the Year. In 1976 Guinea would have won the African Nations Cup Final but Morocco equalised in the dying minutes of their final match after Cherif’s goal had put them ahead. He retired in 1980.  He coached the national team and was later Technical Director of football. At a FIFA awards ceremony, Chérif was named Guinea’s Player of the 20th Century. A new football centre based in Conakry, the Academie Chérif Souleymane, keeps his name alive for the next generation of African footballers.

Educators could look at the life of Souleymane with their students to reflect on his experiences of being different – a black footballer in a monocultural and relatively isolated society. At the same time, his life story can be used to shed another light onto the DDR society, as well as an entry to talk about football in Guinea and Africa at large.

The best place to start to find out more about Souleymane would be a recent article on the BBC, authored by Mohamed Fajah Barrie. The German portal Migration Geschichte provides more background on his life. German broadcaster NDR featured a longer item on his life. Also the German public broadcast programme Sportschau has produced a short documentary on the “Pele of Brandenburg”. This is a title of a recent documentary film, produced by Benjamin Unger and Matthias Hufmann, on which Deutsche Welle has written. Guinean television broadcaster SAT-TV GN recently aired a 30-minute interview with Souleumane in French.

A pioneering African footballer in the DDR.

Next
Rethinking the football museum