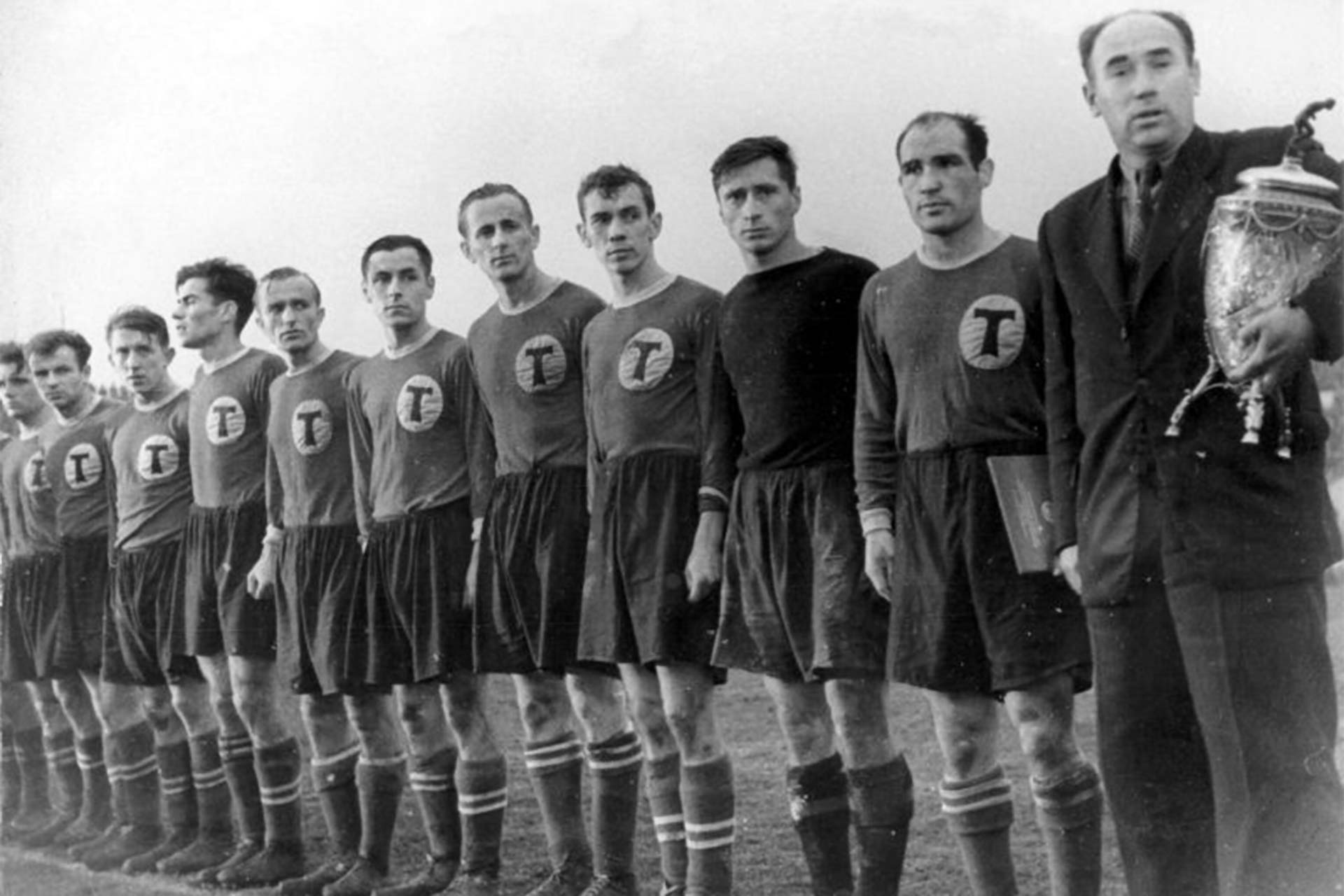 Basque in the USSR

Excellent left back, Communist cadre leader, or Both?

Home
Stories
On This Day
Basque in the USSR

Today, 18 November, marks the birth of Agustín Gómez de Pagola in 1922. Was he an excellent left back or a skilled Communist cadre leader? A Russian or a true-born Basque? This is the adventurous story of the Spanish footballer turned Communist leader, where football and history intertwine across borders.

A “Child of Russia” escapes the war

At the tender age of fifteen, Agustín Gómez de Segura Pagola boarded a ship that would take him all the way to Odessa. This was part of a Basque regional programme that would take 1489 children to the Soviet Union as refugees of the Spanish Civil War. Gómez was born in 1922 in Rentería, a town deep in the Basque country, by the waters of the river Oiartzun. In Rentería, and indeed in the whole of the Basque country, the Spanish Republic was broadly supported by the population, and the Republicans were gearing up to face the rebellion led by General Francisco Franco.

Agustín would be spared from the horrors of war, but would find himself living in an orphanage in Odessa, with not much more to do than play football with the other children. His talent with the ball was noticed, and soon thereafter he was taken to Moscow to start studying engineering, work at a factory, and, most importantly, to try out his luck in the local football clubs of the Russian capital.

Torpedoed to the top

In 1941, Gómez joined the Red Army and started playing for Krasnaya Roza, the Red Rose. The skillful left back displayed speed, control and good marking, and was soon scouted by the  team Krylia Sovetov Samara. He was later picked up by the team that became his home, Torpedo Moscow, the team of the Soviet automobile industry. Torpedo quickly made Agustín the captain of their team, and achieved astonishing seasons in 1949 and 1952, winning the national cup. The Soviet government recognised Agustín’s sporting achievements, and awarded him the honour of Merited Master of Sport of the USSR in 1952. He was the first foreigner to ever obtain this award. By this point, the “Legendary Basque” had become a fervent Communist, an excellent Russian speaker and, on a personal level, a man deeply in love with Moscow. Accounts tell how his home doubled as a meeting point for comrades and friends, where politics and philosophy would be discussed well into the night. It was not uncommon to spot Gómez strolling alone at night through the Red Square, taking in the view.

Agustín got to be part of the Soviet team for the 1952 Helsinki Olympics, though he remained on the bench during the competition. Gómez, thanks to his political networks, met Dolores Ibárruri, the legendary Spanish-Soviet activist in hiding nicknamed “La Pasionaria”, who famously coined the wartime slogan “No Pasarán”, and was organising the Spanish resistance to Francoism from Moscow. These meetings helped Agustín to a great extent to finally decide to return to Spain.

After Stalin’s death in 1953, old Soviet policies began to be reevaluated as the new leadership attempted to de-Stalinize the Soviet power machine. Among these, the “Russian Children” policy was reviewed. International arrangements were set in place to facilitate the return of these children to their homelands, and so Agustín got his chance to return to Spain. Moscow, meanwhile, was delighted to be able to place a skilled operator and Soviet loyalist like Agustín in the heartland of Spain in order to whip the local Communist Party into shape. Torpedo Moscow’s captain managed to reach an agreement with Real Madrid, and it seemed as though Gómez was on his way to Spanish stardom. Sadly, Agustín’s path turned out to be more complex than this.

Upon arrival at the port of Castellón, Agustín got questioned by the Spanish police force. Proudly, he confirmed he was a communist. Soon thereafter, the transfer to Real Madrid – then strongly associated with Francoism – unsurprisingly fell through. Rivals Atlético Madrid decided to pick him up and include him once in their line-up as a trial. Gómez, 34 and out of shape, offered a poor performance, while getting harassed by fans, who taunted him for being a “commie” or a “mason”. This lacklustre night would prove to be Agustín’s last appearance on the football pitch. After his last appearance for Madrid, he moved back to the Basque country and began coaching local teams.

The anti-Franco operator and his twilight years

The quiet life of the modest local team coach did not suit Gómez all too well, who took it upon himself to reorganise the Basque Communist Party, while strictly following Moscow’s guidelines. He swiftly became the party’s secretary general. In 1961, after being followed by the Francoist secret services for years, Agustín was detained and sent to the Carabanchel jail in Madrid, where he was tortured to no avail – Gómez was unwilling to aid the Franco regime in any capacity whatsoever. Intense diplomatic pressure from the Soviet Union and other countries with which Spain was trying to fix relations forced Franco’s hand. Massive protests in Moscovite factories demanded his release. Franco ended up releasing the Legendary Basque.

Agustín was forced to go into hiding in South America and later France, while leading the Basque Communist Party and participating in the Spanish Communist Party. There, he clashed with fellow comrades who disagreed with the hands-on approach of the Soviet Union with the other nations within the Warsaw Pact and were looking to modernize Spanish communism. Disgruntled at this new, liberal direction most of the Spanish Communist Party adhered to, Gómez finally decided to found a splinter party of the PCE with a handful of other Moscow loyalists, and generous backing from the USSR.

Suffering from a rapidly worsening health condition, Agustín Gómez decided to return to his beloved Moscow, where he spent his final months. He passed away on the 16th of November of 1975, four days before General Franco’s death. Perhaps fittingly, his remains lie in the Orthodox Donskoye Cemetery in Moscow, where his gravestone reads – in Spanish – Agustín Gómez Pagola, Communist leader. Remembering a life that knew no borders.

From the very beginning, Gómez’s story transcends borders and identity groups. It also shows how fluid exchange between borders was during the 20th century, challenging the notion that globalisation is a recent phenomenon rather than a process that has existed for centuries and can be tracked far into human history. How different is the world we live in today from the one a hundred years ago? What periods in history other than the 21st century were characterised by intense trade, migration, common lingua francas, cultural exchanges and traveling?

As outlined by the story, it is extremely challenging to pinpoint what country Gómez identified with the most. What is more, as a fervent Communist, his belief system was based on international cooperation between workers, beyond the confines of the nation state. Can you think of other players from modern times with such shared allegiances? What can we learn from their countries’ histories by looking at their personal lives?

Mesut Özil’s friendship with Turkish president Erdogan has met a cold reception in Germany, for example. What do you think the differences between Gómez’s case and Özil’s are? Do you think there is a correlation between having meaningful multicultural exchange and the likelihood to hold nationalist views?

A story of a Spanish footballer turned Communist leader, where football and history intertwine across borders.

Previous
What does identity have to do with football?