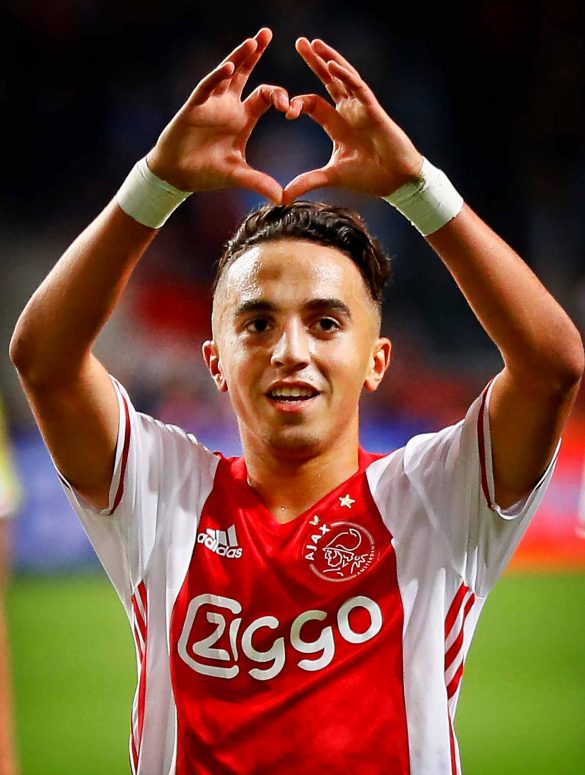 Uniting the City in Talent and Tragedy

On the 12th of june 2022 the city of Amsterdam renamed a square in the western part of the city ‘A. Nouriplein’ (A. Nouri Square) after the former Ajax Amsterdam midfielder Abdelhak ‘Appie’ Nouri.

In a city which doesn’t make the honoring of football players a regular habit this was an important and signifying gesture. Especially when taking into account that after a heart failure, Nouri had to stop playing football at the age of 20, only at the brink of becoming a first team player at Ajax Amsterdam.

Abdelhak Nouri was born in april 1997 in Amsterdam. Amsterdam, the dutch capital, recovered in the 90s from decades of economic decline, neglect and depopulation. In the period of decline (60s-80s) migrants from Surinam, a former dutch colony, and migrant workers from Morocco and Turkey immigrated and changed the Amsterdam demography.

The Moroccan and Turkish migrant workers settled for a larger part in the post-war western part of the city.
This Moroccan diaspora attracted more migrants, among them the father of Abdelhak Nouri in 1990. He came to study in the Netherlands and, to finance this, he started working in a islamic butcher’s shop and later became the owner of that same shop. When his son Abdelhak started playing for Ajax Amsterdam, his father proudly dedicated part of his shop to show photos of his young son in action.

Abdelhak started playing in the Ajax youth teams as a 7 year old. In the years following he was generally acknowledged as one of the most promising talents of Ajax Amsterdam and soon also as one of the best youth players of the Netherlands. According to a well known Dutch sports journalist Henk Spaan, who followed Nouri since he was nine years old, Nouri mesmerized him and many others in the Ajax youth academy with his technique, vision and grace at a young age. The Guardian tipped him off as one of the 40 best young talents in world football in 2014.

In september 2016 Abdelhak Nouri debuted in the Ajax first team and scored immediately. He chose the player’s number 34, to show his will to be of importance for Ajax’ 34th national title. With only 15 minutes of playtime before the 2017-2018, Nouri was already one of the most popular players in the Ajax squad of that time among the fans. In the summer break of 2017 it was generally expected that Nouri would be one of the starting players of Ajax’ first squad for the next season.

On the 8th of July 2017 Ajax was preparing for the next season in Austria and played a friendly game against the German squad Werder Bremen. During that game Abdelhak Nouri collapsed and stayed unconscious on the field while medics rushed to his help. Nouri suffered a cardiac attack. He survived but suffered severe and permanent brain damage.

Mirror for the City

The foremost importance of Appie Nouri lies in his qualities as a football player. He was generally seen as one of the most promising youth players in the Netherlands, bringing cheer on the pitch and surprising friends and foes with an impressive amount of technical skills and a very visible drive to become a great player.

But another importance of Nouri showed a week after the accident in Austria. All staff and players of Ajax came to the house of the Nouri family to show their support. They were accompanied by thousands of Ajax’ supporters as well as crowds from the neighborhood.

A gathering of this kind, bringing together Amsterdam inhabitants from very different backgrounds, has seldom been seen. Amsterdam has for centuries been a home for migrants, seeking for (religious) freedom, work or well being. The city and inhabitants dealt with migrants during the ages in more or less a general way. It was in most cases accepted that they came to the city, but it took generations to accept them as a part of the community. This was also the case for the groups of migrants that arrived in the 70s-80s, most of them from Surinam, Morocco and Turkey. They were more or less accepted, but in many cases segregated in communities living in their ‘own’ neighborhoods. And the acceptance of migrants living in Amsterdam knew limits. In 1997, the year Abdelhak Nouri was born, four of the 45 seats in the Amsterdam town council were occupied by a right extremist xenophobic party.

Ajax has been part of an Amsterdam identity since the club became famous in the start of the 70s, winning three European Championships and a World Cup, built upon a core of players who grew up in Amsterdam. But it took some time before the Ajax players reflected the changing Amsterdam demography. In 1980 the first Surinamese player, Frank Rijkaard, made his debut. A couple of dozen followed him, often becoming very important players. The introduction of players with a Moroccan background took even more time. After several Dutch-Moriccan players had developed difficult relationships with Ajax and Ajax-supporters it developed as an urban tale that Ajax was not capable of dealing with Dutch-Moroccan players, who were stereotyped as difficult to work with. On the flipside Ajax had hardly any fanbase in the western part of the city, where young football fans saw the club of their own city as anti-Moroccan.

This negative interaction was ended by Nouri. Being a child of Amsterdam West and Ajax, adopted by his neighborhood, the club and the city, Nouri reflected the whole city in one person.

Two years after the collapse of Abdelhak Nouri the website marokko.nl, targeting Dutch-Moroccan youngsters, announced that from the 38 players Ajax had selected for their 2019-2020 season in the Champions League, four players were from Moroccan descent.

Five year after the collapse the city of Amsterdam renamed a square in Amsterdam West after Abdelhak Nouri in the presence of the Nouri family, Ajax supporters and the city Mayor. The art work related to Nouri consisted of his name, his player’s number ‘34’ and the word ‘verbroedering’, fraternization.

Educators could work with young people and reflect on the story of Nouri, exploring questions like:

You can read more about the relation between Ajax and Suriname on Dutch newspaper Het Parool. The story of Nouri is also noted in The Guardian. Visit the website of the family butchery business on Slagerij Buzhu. Watch the local TV AT5 report about Nouri.

Nouri is a young local talent who was making his way to the top level when tragedy befell him. He suffered severe brain damage.

Next
Formation for Human Rights