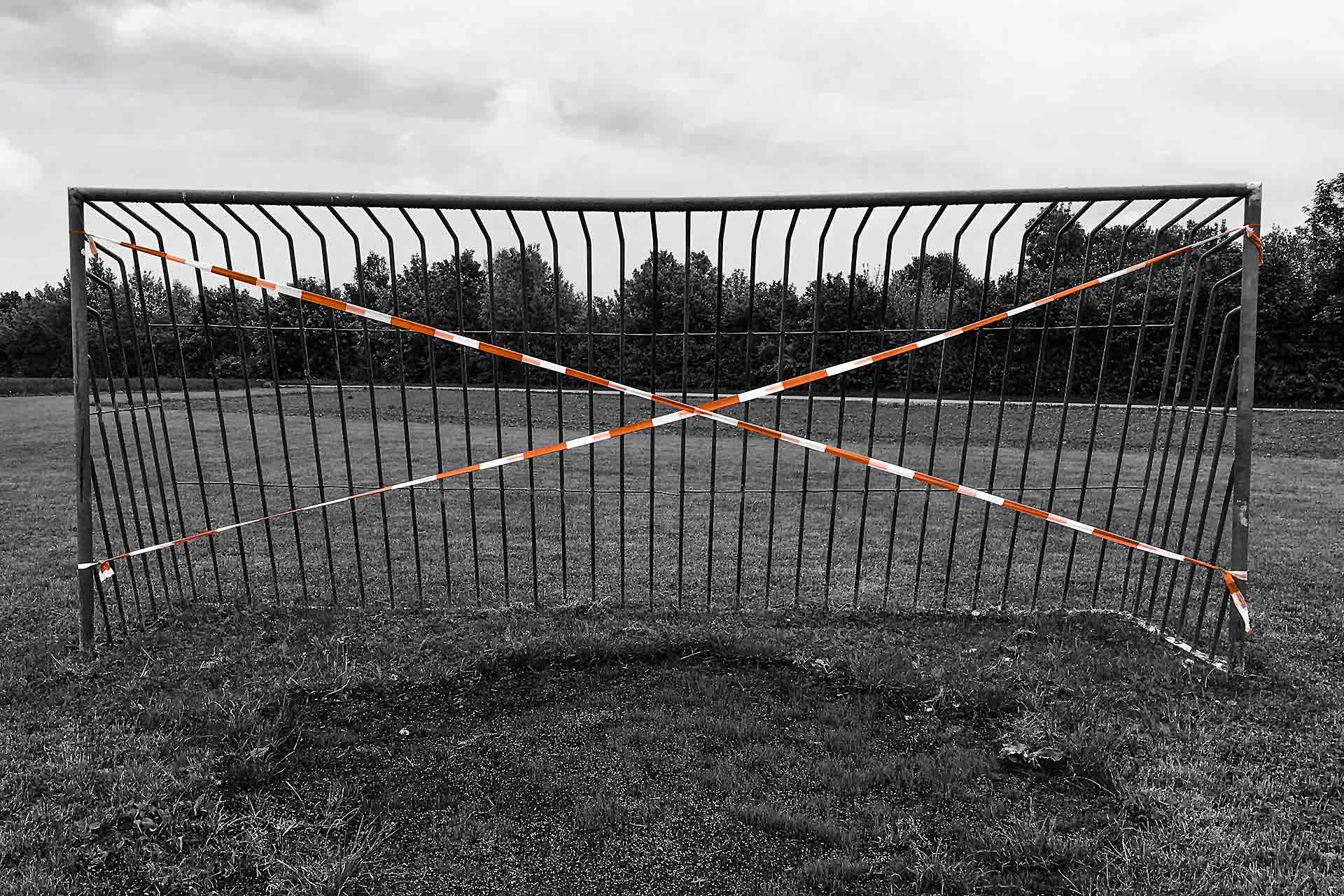 Home
Stories
On This Day
When football went viral

COVID-19 has turned our worlds upside down – and will probably continue to do so for a while. One year ago today, 19 february 2020, a Champions League match played in Milan’s San Siro enabled the notorious virus to spread through football on a scale it had never seen before. Our FMH team is keen on highlighting why historical stories are still relevant for today’s society. However, since this project officially kicked off early 2019, none of the developers knew they would actually be part of history. As we all are.

In this story, I try to reflect on the pandemic’s impact on the world of football. To grasp the overall impact of the virus we need to wait a couple more years. But for now we can already say: Exposed to the pandemic, Football made history, during the past twelve months. But it also created opportunities for change.

This is the feeling I have when I enter a hotel lobby in Eindhoven (The Netherlands) on Thursday, February 13th, 2020. For three days, the Football Makes History developers team is attending a European training workshop again. After meetings and workshops in Rotterdam, Bucharest and Frankfurt, and after (close to) finishing the educational resources for the Historiana platform, this was going to be the fourth and possibly final group gathering. From all over Europe, from Reykjavik to Athens, from Helsinki to Milan, our team members flew into Amsterdam, and took the southbound train to “Philips town”. Despite the strong wind and Dutch winter rain, the group, for a few days accompanied by German football legend Petra Landers, has a great time.

Without anyone participating knowing, the meeting turned out to be a farewell. To a world we all considered common sense. Even us, historians. News bulletins at that time were already reporting about the Coronavirus. It dominated life in Chinese megacities. But it seemed half a world away. Even us, historians, hardly talked about it. If the meeting had been held only a week later, during the city’s carnaval celebrations, it might have been a super spreader event. Little did we know.

The euphoria of the crowds

Little did the 40,000 football fans traveling to Milan’s San Siro stadium know what the effect would be of the game on February 19th. Not Internazionale or AC Milan would be the home stars of this round-of-sixteen-match, but the low-budget-high-spirit surprise team of the pretty, modest, working-class Lombardian city of Bergamo, at 50 kilometers distance. Since UEFA regulations didn’t consider Atalanta’s stadium suitable enough for a high end Champions League match, especially in terms of capacity (related to ticket revenue), Atalanta Bergamo was able to play the match against Valencia in San Siro.

A third of Bergamo’s population travels in buses and trains to nearby Milan, subways to the stadium are packed. In town, fans of both teams are having a ball, especially after Atalanta’s sensational 4:1 victory. The team, which in its history had only won the 1963 Coppa Italia, were on their way to the Champions League quarter finals: an absolute highlight in the team’s history, which was celebrated by euphorical crowds that night in the streets of Milan.

And the rest was history? Indeed. Without anyone knowing it, Atalanta-Valencia became the first super spreader event in Europe for the ominous virus, which, in a world in which travelling was also common sense, had managed to find its way outside of China. Italy’s patient zero was confirmed two days before kickoff, in the town of Codongo, 50 kilometers from Milan,100km from Bergamo. By match day, there were three official cases of the virus in Italy.

A week later Bergamo was notorious for being the first corona epicenter in Europe. Local morgues could not cope with the rising coronavirus death toll. Worldwide, news networks show the images of army trucks transporting coffins to cremation sites in nearby towns. Official reports talk about at least 3,000 dead, in a city of 120,000 inhabitants. Many Europeans finally become aware of the urge of the situation.

The same week, famous sports journalist Kike Mateu, who was reporting the match for Spanish television and interviewed a number of players in Milan, is being diagnosed as “patient zero” in the region of Valencia. Several players and staff members of Valencia test positive as well. Shortly after, Italy and Spain are the first European countries announcing a national lockdown. The epic story of a regional football squad making history, turns around tragically. The San Siro match, Atalanta’s most euphoric moment in history, is in hindsight being considered a “biological bomb”.

Three weeks later in Valencia, Atalanta qualified for the semi-finals. In Valencia, the team wins again: 4-3. The stadium seats are empty. COVID-19 makes no exception for the world of big money football. In March 2020, not only Champions League is put on hold, almost all professional football leagues are paused, some of them never to be regained again. EURO 2020 is being postponed a year to 2021, just as… well, basically any event we know.

Back to Eindhoven. Trending topic during the meeting of this project’s developers team is the article and podcast series “How modern football became broken beyond repair’ published in the Independent, just before the meeting starts. It deals with the growing financial and competitive imbalance of the sport, with the big teams only getting bigger since the start of both Champions League and Premier League in 1992. Income from broadcasting has been dominating the game ever since. The article states that “Prior to this run, Bayern Munich had never won more than three Bundesliga titles in a row. They have now won seven in a row, which is by far the longest streak of league victories in Germany’s history. It is also one of eight such situations across Europe.”

Author Miguel Delaney continued: “It is not just that the wealthiest clubs are winning much more, however. It is that they are winning by much more. There has never been a situation where so many of Europe’s leagues – 13 of 54 – are suffering such domination at the same time.”

The article asks itself a poignant question: “What can we do to save football?”. “Putting a hold on it, because of a pandemic” isn’t one of the answers. But a year later, it is interesting to see the impact on football all over the globe. Yes, when I’m writing this article, Bayern Munich is still heading the Bundesliga. But they don’t seem as invincible as a year ago – and even got thrown out of the German Cup by second Bundesliga squad Holstein Kiel recently. Juventus, now third in Serie A, seem to have become “human” instead of an ever-winning “machine” winning eight titles in a row.

Yes, big teams still are big teams – and they will continue to be – but it seems football in empty stadiums, has been leading to a significant amount of more surprising results. And to a higher number of goals. Even on the highest level: who would’ve expected Bayern to beat Barcelona 8:2 in a Champions League 2020 quarter final? Or the last year so mighty Liverpool being humiliated 7:2 by Aston Villa in a Premier League match? Or the other way around: Ajax beating poor VVV Venlo with 0:13?

Of course, just like anything concerning the virus, there are many factors to be taken into account,  but a theory we’d like to put on the table, is that – in terms of money and results – professional football has become less disbalanced since COVID-19 broke out. Or shall we say: less out of control? Having less TV income from the big matches (after all: for many fans watching “ghost games” is no fun) and no ticket sales revenue, while playing in big, expensive stadiums, big teams might be less “monstrous” then they have been a year ago.

At the same time, Bernabeu, Camp Nou, Anfield Road or De Kuip aren’t the pandemoniums anymore that make the home team leading 1-0 at kick-off. In empty stadiums, one can say, there is hardly a home or away team anymore. What’s the intimidating impact of a Yellow Wall (Borussia Dortmund), when you can almost count the number of seats?

This “democratization” also seems to play a role on the pitch. Of course, many of us would say that having less fans in the stadium also means having less soul. Or might we state as well: it also means less tribalism? We have the impression that this new context, in which football has been temporarily stripped from its big money jacket, has made it easier for football players to speak out in social matters. With no EURO 2020 tournament coming up, asking for all their focus and energy, players like Memphis Depay and Denzel Dumfries were able to attend Black Lives Matter protests, while Marcus Rashford could start his much appraised campaign to provide millions of poor school children with meals, also in holiday times. In corona times, not surrounded by flashing cameras and thousands of fans every second, many athletes took control in choosing how and when they wanted to send their message, and carried it out.

In December 2020, the Champions League match between Paris Saint Germain and Istanbul Basaksehir was suspended, after fourth official Sebastian Coltescu used racial language to identify Pierre Wbo, assistant manager of the Turkish team. The decision of the players to walk off the pitch was praised, forcing the issue onto UEFA. But the question remains: Would the players have also walked off in a full stadium? How would the crowd have reacted? Walking off has been important and necessary. But it also shows there is still a long way to go.

Whatever happens when stadiums are filling up one day, no one can say. But for professional football, this corona year seems to have created a golden opportunity to bring about some much needed changes in the future – just like it brings opportunities to break with the world we have been living in. Will it also make history as the year in which the broken world of professional football is on its way to repair? Time will tell. And historians probably, too.

The Atalanta-Valencia game has been beautifully narrated in The Bleacher Report, New York Times, Goal.com, COPA90. Make sure you read the series on the state of football before the pandemic on The Independent. There are also perspectives which can help students put the game of February 2020 in perspective, for example the ways in which the international game between Italy and The Netherlands on 14th October 2020 paid respect to the victims of covid-19 in Bergamo.

Next
Should we always blame someone when something goes wrong?