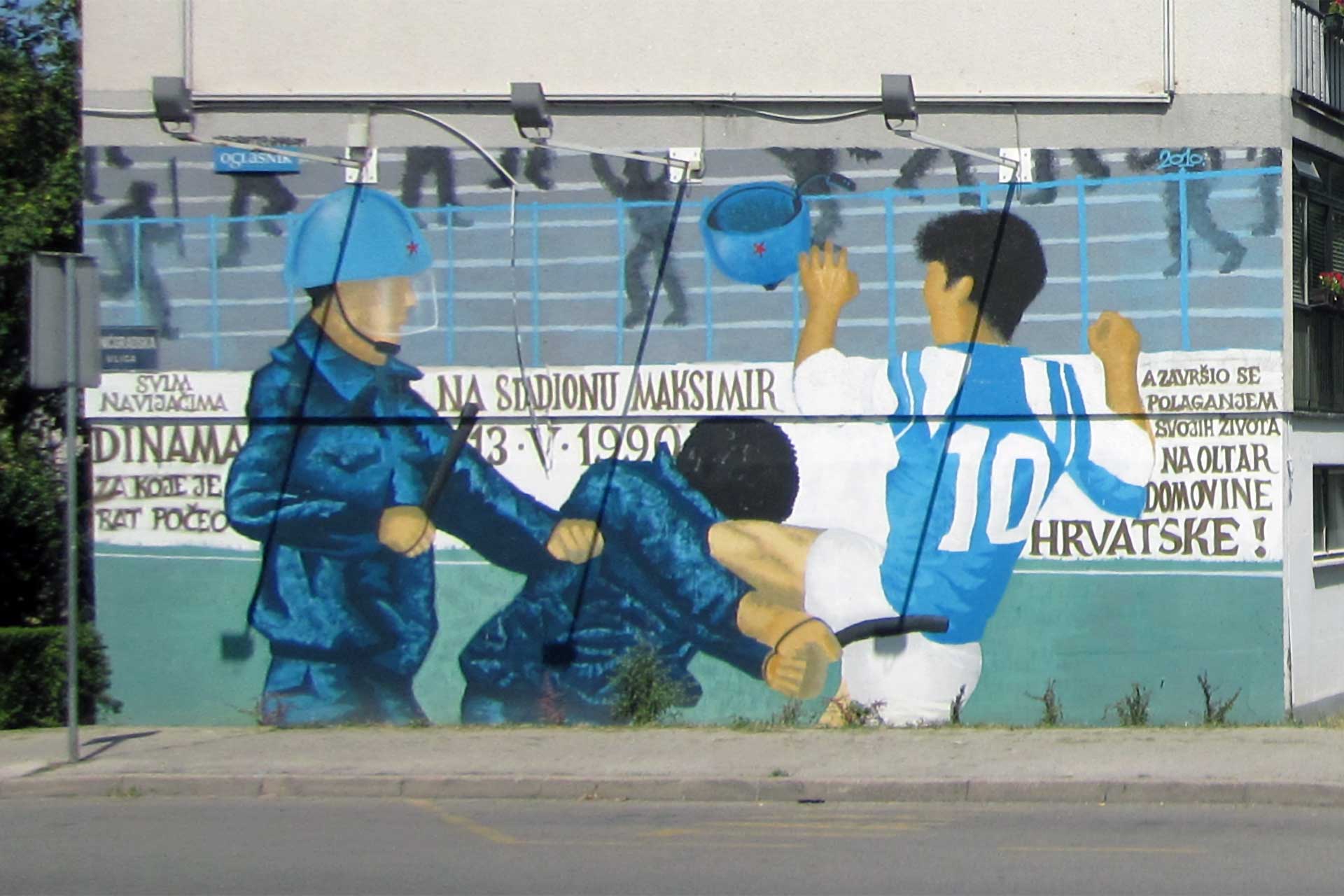 Today in 1990: a match to teach the collapse of Yugoslavia

How to use a game of football to teach about the Yugoslav dissolution?

Home
Stories
Today in 1990: a match to teach the collapse of Yugoslavia

On 13 May 1990 – thirty years ago – the game between the ‘eternal’ rivals of Yugoslav football, Dinamo Zagreb and Red Star Belgrade, had to be suspended at Maksimir stadium in Zagreb due to violent clashes between opposing sets of fans. This football match might have had not only a strong influence in the history of football but might have changed the world. Understanding this myth around this Football match and the riots can teach us about the collapse of Yugoslavia.

There are only a few occasions of Yugoslav sporting history that have received – and continue to receive – the amount of scholarly and journalistic interest as the so-called ‘Maksimir riots’ of 13 May 1990. Occasions in the same league of interest would arguably be ‘Tito-Stalin football war’ or the 1984 Winter Olympic Games in Sarajevo, but otherwise one would struggle to find adequate parallel of similar (ascribed and/or real) significance.

Some commentators have ascribed even global significance, with CNN listing it as ‘one of five football games that have changed the world’. The incident itself is widely covered by regional and international scholarship, in most detail by Richard Mills in his book ‘The Politics of Football in Yugoslavia’.

Today, on the 30th anniversary of the ‘Maksimir riots’, it is thus worthwhile revisiting the incident itself, its mythologised narrative perpetuated in regional/international media and amongst football fans, but also illustrating – as is being done in many other cases of the Football Makes History project – how a moment in football history can be used to teach about wider social, political and cultural aspects; in this case about late socialist Yugoslavia, its dissolution and how it is remembered today.

The ‘Maksimir riots’ present a unique opportunity to introduce students and pupils to the wider political context of late socialist Yugoslavia through the history of a football game. It is important to illustrate that the incident did not happen ‘out of nowhere’, but that it has to be put in the context of both a rapidly deteriorating social, economic and political climate in socialist Yugoslavia and the simultaneous upcoming and establishment of modern organised football fan groups as we know them today.

During the late 1980s and especially during the early 1990s, Yugoslav club football was an ideologically and physically contested terrain. Supporters, organised in fan groups, increasingly demonstrated a strong sense of national allegiance and promoted violence against others on an ethnic and national basis. The increased politicization of everyday life ‘from above’ was accompanied by a politicization of sport ‘from below’. In this politically loaded phase, with nationalism flaring up in Yugoslav republics alongside the political rise of Slobodan Milošević, the atmosphere within stadia often emulated political discourse with mobilizing expressions of nationalist sentiment.

This manifested itself in a variety of ways: through the appearance of ‘national’ flags, aggressive political chants, various Ustaša and Četnik symbols, iconography and paraphernalia, and the singing of ‘forbidden and nationalistic song’ and the open pronouncement of anti-Yugoslav sentiments or hatred against ‘other’ republics. Though predominantly visible within the relatively small and socially marginalized communities of ‘football fan tribes’, the tense situation in sporting arenas resulted in recurring and brutal violence emblematic of the critical and fragile condition of the Yugoslav state system in the late 1980s and early 1990s.

The importance of details and the risk of symbolism

The ‘Maksimir riots’ present a popular gateway to the Yugoslav dissolution for journalistic articles, but also in public discourse, particularly amongst football fans. Too often however, and here international football fanzines are arguably at fault the most, authors fall into a trap of over-sensationalising what actually happened and ascribing too much significance to the riots. Teaching a detailed history of what happened that day can further the understanding of cause and consequence during the Yugoslav dissolution and counter the popular narrative of the ‘Maksimir riots’ being the symbolic day, the Yugoslav wars of dissolution began.

A peak in Football-related violence

During a period of political turmoil, economic crisis and general social insecurity, football-related violence arguably peaked on 13 May 1990, when the game between Dinamo Zagreb and Red Star Belgrade was suspended due to violent clashes. Only two weeks after the nationalist and anti-Yugoslav Croatian Democratic Union (HDZ) won the first multi-party elections in the socialist republic of Croatia, the tensely awaited match turned violent when the club’s hooligan groups – the Red Star Belgrade fan group Delije, headed by future Serbian war criminal and paramilitary leader Željko ‘Arkan’ Ražnatović, and the Dinamo fan group, Bad Blue Boys (BBB) – clashed in wild stadium and street fights. As soon as the ‘fan tribes’ entered the stands, they began exchanging verbal political and ethno-religious insults: ‘We are the Četniks, we are the strongest, we are the strongest’ and ‘Serbia to Zagreb’ came from the south stands, where Delije were located. These chants were countered by ‘When you are happy hit a Serb to the ground, when you are happy slaughter him with a knife, when you are happy shout loudly Croatia, independent state’ from the Bad Blue Boys in the north stands.

At one point, Delije started tearing down banners and demolishing the stadium, which led to some minor physical confrontations with Dinamo Zagreb supporters in the south stands. Soon, however, the Bad Blue Boys decided to assist their fellow club supporters, breaking through the fence of the north stands and brawling with a poorly organized and totally outnumbered police force on the pitch. It resulted in the worst riot in Yugoslav sporting history.

It is crucial not to suspend the analysis of the ‘Maksimir riots’ with the actual incidents. The riots were broadcast on live television and were subsequently a topic of heated political and media debate for several weeks. However, the ‘Maksimir myth’ of how we remember the incident and what significance is often ascribed to it, only began being formed in the years to come.

Today, three decades after, the dominant narrative in post-Yugoslav societies is that the riots represent the symbolic date when the dissolution of Yugoslavia began – ‘the day the war started’. However, they are remembered in divergent ways.

Remembering the ‘myth’ in Serbia

Research by Ivan Djordjevic has shown that in Serbia, media and popular narratives about the riots are mostly characterized by ‘silence’. Furthermore, there is no mythologization of the riots by Delije. This is quite understandable since they were ultimately the symbolic losers of the riots, particularly if one interprets them as ‘the day the war started’. In addition, Serbian public discourse is still very strongly defined by a lack of consensus in dealing with the Yugoslav wars of the 1990s and the question of Serbian responsibility. With regard to football fan tribes, particularly the Delije, who were among the first to volunteer for and operate in paramilitary combat, this translates to having to construct a sense of pride for having given their lives in a war in which Serbia ‘officially never took part’.

Remembering the ‘myth’ in Croatia

In Croatia, the ‘Maksimir riots’ must be identified as a contemporary Croatian myth. Just outside of the stadium, the Bad Blue Boys erected a monument to their fallen friends with the inscription: ‘to all Dinamo fans for whom the war started on 13 May 1990 and ended by them laying their lives on the altar of the Croatian homeland’. The myth of Maksimir functions as a founding myth of post-Yugoslav Croatia, which supports the dominant national narrative of Croatia’s formative years; namely the inevitability of the Yugoslav dissolution and the formation of a Croatian nation state as a conditio sine qua non. It was the politicization and subsequent ideological exploitation of the events under the 1990s Franjo Tuđman regime that led to their mythologization and established the widespread narrative of the game as a symbolic initiation of Yugoslav wars of dissolution. By excluding political alternatives and competing narratives which portrayed the formative years as a contested political struggle rather than a ‘manifestation of people’s will’, a notion of ideological homogeneity of Croatian society was constructed, which functioned as a mechanism to secure legitimacy.

Internationally, the main driver of mythologization are football fanzines who episodically report on the ‘the day the war started’ when referring to the Maksimir riots and who very rarely offer any of the three aspects dealt with in this text: context, detail, mythologization. Unfortunately, more often than not, they contribute to the perpetuation of these mythologised narratives, by not exploring the difference of cause and consequence within historic processes and the importance of contextualisation.

An opportunity for learning

Today, the teacher in the ex-Yugoslav classroom setting (and beyond) could critically engage students with the dominant narratives surrounding the Maksimir riots and re-evaluate mythologised stories about the Yugoslav dissolution. For classrooms beyond this region the Maksmir riots offer a gateway to teach about the history of the first major war on European soil after World War II but also to discuss about various entanglements of football and history, using the ex-Yugoslav region as a particular example.

The riots as a consequence, not a cause

The ‘war’ definitely did not start at Maksimir on 13 May 1990. There is no doubt that sports in late-socialist Yugoslavia can be described as a ‘national motor’ and that the Maksimir riots reflected the political tensions which existed and were developing in the socialist federation at that time. One observation that has been echoed by several critical scholars such as Gal Kirn is that the riots represent an incident in which football became political in a direct way, a social catalyst and condensation of the social complexities that triggered major social change.

I would add that the riots themselves should be understood as a ‘condensed symptom’ of an ongoing political radicalization in the Croatian and Serbian republics and a deductive ‘consequence’ of these polarizing policies. Maksimir was the beginning of an accelerated process, in which sports would become a significant nationalizing and homogenizing factor in some of the Yugoslav republics.

Some parts of this text have originally been published in the Balkanist Magazine.

Next
Football Lockdowns: Smallpox outbreak in 1972