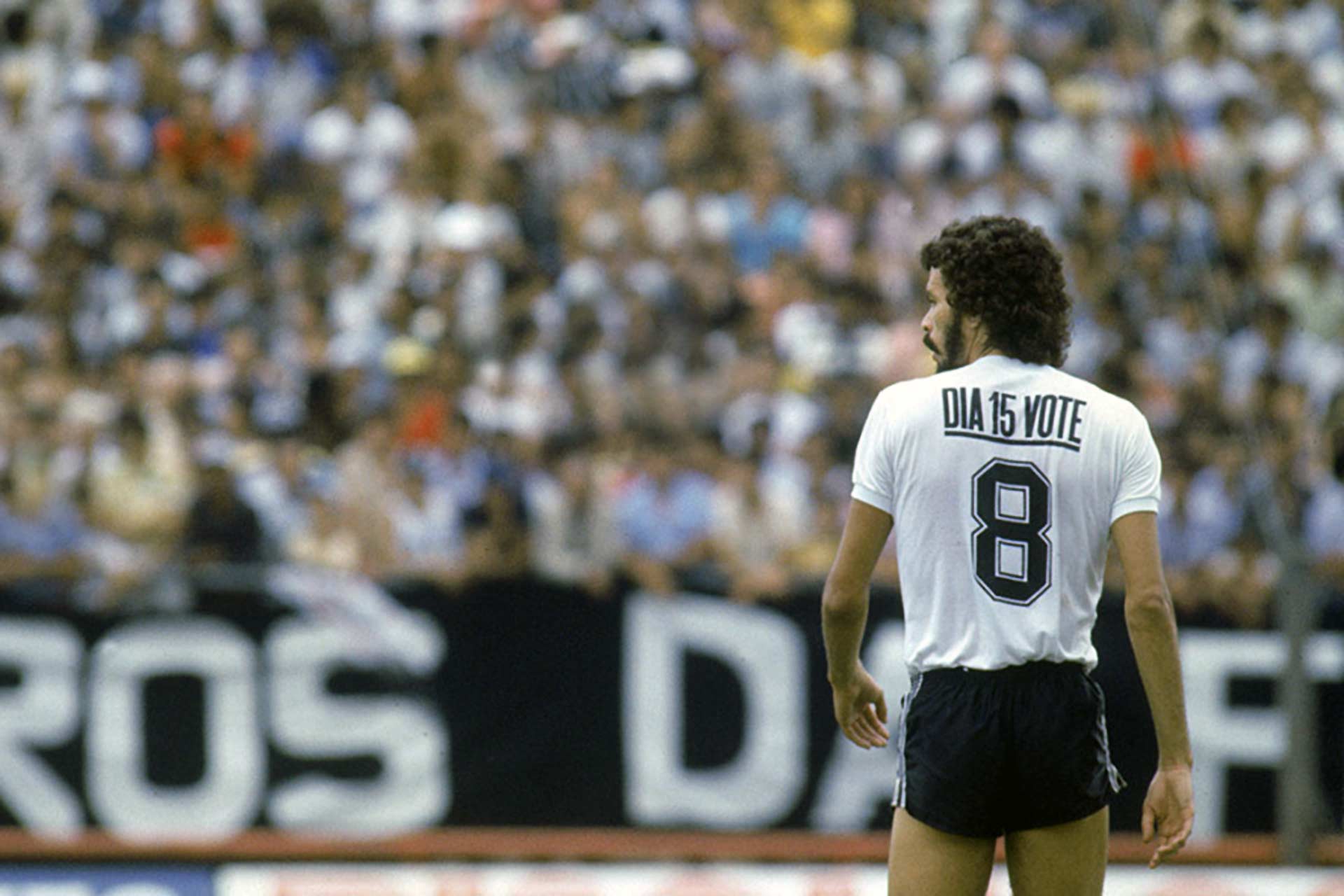 Urging people to vote by wearing the shirt (Photo: Livro-Reportagem).
On This Day
·December 4, 2020·5 min read

How a football team helped to dismantle a dictatorship

Home
Stories
On This Day
One man, One vote

Can football play a role in changing society? Possibly. One striking example takes us across the ocean and back four decades. In the early 1980s, Brazil was living in a brutal military dictatorship. One oppositional movement became visible to a wide audience all over the country, shouting for democracy and fueling the fire for the masses.

I want to die on a Sunday

December 4th, 2011: it might have been the most bitter sweet day in Corinthians’ history. On the day the São Paulo squad won its first Brazilian title in six years, millions of fans spilled tears of joy – and of grief. It was the day Sócrates had passed away. The Doctor. The most renowned player in club history. Icon of the much praised 1980s Brazilian national team. But most of all an icon of Democracia Corinthiana, the revolutionary movement of the early 1980s in which the team openly said no to Brazil’s military dictatorship. “I want to die on a Sunday”, Sócrates once mentioned in an interview. “On the same day Corinthians will win the championship”. December 4th, 2011 was a Sunday.

Win or lose, but always with Democracy

In Brazilian football, December is the decisive month of the year. Just before summer starts, the football leagues reach their climax. And a climax there was for sure, on December 14th, 1983. In a packed Morumbi stadium, two big São Paulo teams played the final of the Paulista State Championship – a league which many Paulistanos consider even more important than the Brazilian Serie A. Title holders Corinthians – since its foundation in 1914 considered a working class team – were facing their conservative rivals, São Paulo FC. After winning their second title in a row, the Corinthians players carried a huge banner, having a message towards the military dictatorship. “Win or lose”, it said. “But always with democracy” . It was Corinthians´ first back-to-back title in over 30 years. It was one of the most powerful statements in Brazilian football history as well.

Every player has a voice

At the time, Democracia Corinthiana defined Corinthians’ team spirit for two successful years.  Working together closely, four men had democratized the football club in many ways. Instead of blindly following orders of the board of directors, they demanded that any subject had to be voted upon. Everyone involved in the team, from the cleaner to the chairman, should have a vote in any decision. And every single subject – from toilet breaks to transfers – should be voted upon. In Corinthian Democracy, every player had a voice.

These four men were full-back Wladimir, young striker Walter Casegrande and the team’s  progressive new football director, Adilson Monteiro Alves. But the icon of Democracia Corinthiana was Corinthians’ absolute star player and captain, Sócrates – who as a tall, chain-smoker, heavy drinker and qualified physician still can be regarded as one of the most unlikely football heroes in history. When Alves – who had a background as a sociologist – was appointed, he and Sócrates built up a strong relationship. The captain saw his opportunity to begin a revolution from within.

Go out and vote

While paving the long way towards democracy together, the collective introduced many innovations. For example, Corinthians were the first club to use slogans on their jerseys. For making the word “Democracy” appear in a visually appealing way, they used the same font as Coca Cola. For pinpointing their message, they added the image of a blood splash. Early November 1982, an even more notable slogan could be seen at the back of their shirts: “Go out and vote on the 15th“; an attempt to motivate fans to vote in the first national election with different parties since the 1964 military coup. And since Corinthians was playing better than ever before, the message could hardly be spread widely in a more appealing way.

In front of millions

When Sócrates spoke at a political rally in São Paulo, in April 1984, he told an estimated 1.5 million people that he’d turn down an offer to play in Italy and stay in Brazil if Congress passed a constitutional amendment to re-establish free elections. When the vote didn’t get through, however, he left to Florence, to play for Fiorentina. When he came back after one season, Democracia Corinthiana had come to an end – just like the dictatorship.

Unleash the potential of football museums

The Democracia Corinthiana movement did not make the dictatorship fall in 1985 – or lead Brazil toward its first presidential elections in 1989. But the movement, spearheaded by Sócrates, did inspire millions of Brazilians to become aware of democratic rights and values – and helped hasten the dictatorship´s demise. To this day, it is one of the most impactful player-power movements football has ever seen.

Back to the present

Timão.  That’s how Brazilians – especially Paulistanos – like to call Corinthians. The big team, from the big city. By being successful in the country´s main sports discipline, Corinthians amplified a message of democracy throughout the country in the early 1980s. It is a message that has become extra relevant again in present-day Brazil. Nowadays, Corinthians’ image still is considered working class, multicultural and politically engaged. On November 9th 2019, players of their squad played a match with a Star of David on their jerseys, remembering Kristallnacht in 1938 Nazi Germany. When Corinthians appointed a new director last week, for some, Sócrates’ days shortly relived: Duílio Monteiro Alves is the son of Adilson Monteiro Alves, director during Democracia Corinthiana days. Will he bring in his dad’s legacy, in a country which is currently governed by someone who openly praises the merits of the past dictatorship? Only time will tell. But Brazil for sure can use some more of Sócrates’ spirit. Just like all of us.

Have a look at the TIFO animated story about Sócrates, or watch the feature about him on Rebels du Foot. You can also read a very interesting article with more background on The Blizzard. The trailer for the documentary Black and White Democracy gives a great short view on this history as well!

Today in 2011 Brazilian footballer Sócrates passed away. This is a story about the role he and his team played in restoring democracy to Brazil.

Previous
Identity through a badge

Next
November in Football