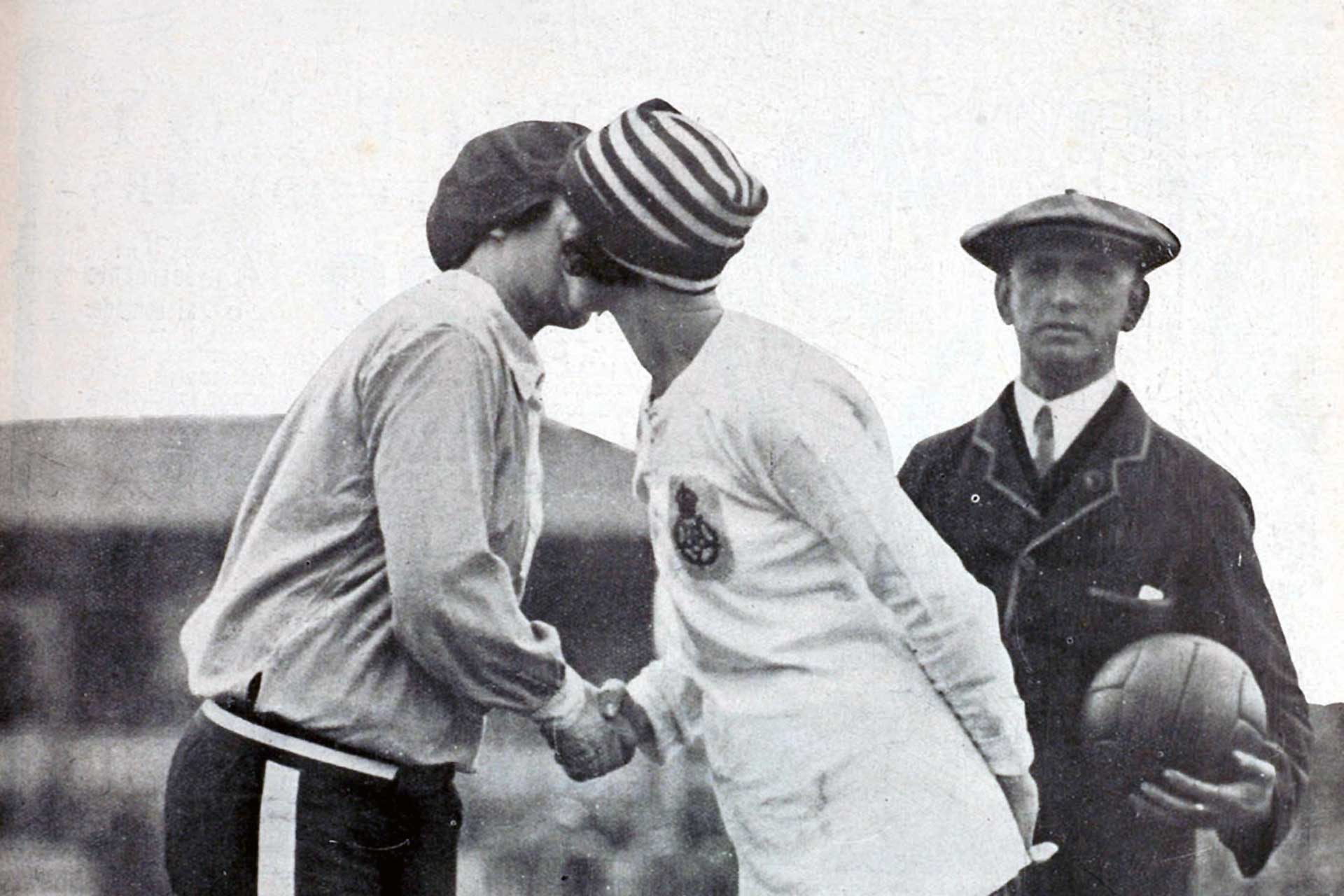 One Iconic Female Football Friendship to explore the 20th century

How can a professional friendship between two female players be studied 95 years later?

A picture published 95 years ago today of two captains of women’s football teams gives us a lens to look at most of the 20th century, as well as at a personal history of friendship.

A picture paints a thousand words

Some pictures tell a big story. This photo was published in a Spanish-language magazine, 13 June 1925. It shows an international women’s football match at Herne Hill, London, on 12 May. The captain of the France team, Carmen Pomies, is greeting the England captain, Florrie Redford, just before the kick-off. It’s a picture that makes you want to know more: about the women’s game in the 1920s; and about the two captains and their friendship.

Let’s start with Florrie. She was a Munitionette’, one of the thousands of women and girls called into armaments factories in the First World War. Hundreds of these munitionettes took to playing football. Florrie’s factory, Dick, Kerr of Preston, Lancashire, became the most famous, and the best of all women’s teams. Florrie was the team’s dynamic centre-forward.

There was a similar surge of interest in women’s football in France. A driving force behind this was Alice Milliat, who set up the Federation Feminine Sportives Francaise, a sports organisation in Paris fostering female participation in athletics and team sports. Alice Milliat also pushed hard to expand the range of women’s events in the Olympic Games. From 1921 she pioneered the Women’s World Games. In 1917, FFSF set up a football team. One of its best players was Carmen Pomies, a multi-talented athlete and javelin champion.

In 1920, Alice Milliat arranged for her football team, Femina of Paris, to travel to England to play a series of matches against Dick, Kerr Ladies. Later in 1920, Dick, Kerr made a reciprocal tour of France. The French women toured England again in 1921. Carmen and Florrie became firm friends. Carmen came to live in Preston, playing for Dick, Kerr and living at Florrie Redford’s home. In 1921, and again in 1923, Florrie was in Paris, playing for Femina and living in Carmen’s home.

In October-November 1922, Dick, Kerr Ladies staged an ambitious tour of North America. It did not go quite as planned. At the last moment, the Canadian FA blocked them from playing in Canada. They arranged nine matches in North America; but these were against men’s teams because American women’s teams were too few and too weak. Even so, the tour was a big success. They won four matches and drew two, watched by big crowds. They got favourable press reports; and were even received by President Harding, who signed a football for them.

Carmen and Florrie were team-mates on this tour. As usual, Florrie was up front, scoring the goals along with Lily Parr, the teenage sensation who played on the left wing. Normally, Carmen was a strong outfield player, but for this tour she was the goalkeeper. A report in the Washington Post, of their 4-4 draw with Washington Kickers said:

Although the men players had many opportunities, they were not successful in registering goals, due to the brilliance of Miss Carmen Pomies the Preston goalkeeper. She stopped eleven of the fifteen attempts on goal by the local booters.

But it’s not that easy to know more. History is about what you do not know, almost as much as what you do know. It can be a bit like doing a jigsaw puzzle when you have no box, no picture, a lot of missing pieces and quite a few pieces from a different puzzle altogether. Women’s football suffered many setbacks after the surge of enthusiasm from 1916 to 1922.

The English FA issued a ban at the end of 1921. Women’s football was banned in France in 1932; it was banned in Austria in 1936. Women carried on playing, but there were fewer teams and less public attention.

What we know about their lives

They kept on playing, and winning, under their new name of Preston Ladies, though they played fewer matches, usually in the summer, in front of smaller crowds. We know Florrie Redford lived in France for a time in 1921, 1923 and again in 1929. We know French teams carried with their tours of England, down to 1938. We know it was a tradition that such tours always included a Girls Day Out at Blackpool, with its Golden Sands and outdoor swimming pool. We know Carmen Pomies kept coming back to Preston almost every year.

We know Florrie Redford emigrated to Canada in 1930, and that she came back to visit family and friends in 1938. We know Carmen was back in France during the Second World War; according to Carmen, she was involved in the French Resistance, smuggling documents from German Army HQ to help escapees from the Occupied Zone. (Carmen’s sister, Helene, was active in the resistance and wrote a book about it in 1947, called Blood in the Mountains).

Football as a post-disaster charity

We know Florrie lived in Coventry after the war, that she married John Fairley, that she died in 1969. We know Carmen went to live in Rochester NY in the late 1940s, that she was still a brilliant athlete, winning one tennis trophy after another. We know she moved to New York to work for the United Nations, until May 1953. We know Carmen returned to France, and died in Paris in 1982.

So much we don’t know

Just because there are so many gaps in what we know about Florrie and Carmen does not mean there will never be answers. Someone, somewhere, knows lots of things; perhaps new evidence will come to light. We hope it does. In the meantime, let’s think again about the El Grafico picture and that polite greeting before kick-off at Herne Hill in 1925.

On its own, it does not mean much; just a greeting between opposing captains. It is a moment in a close friendship that had begun in Preston five years before, between two talented young women whose lives came together through their love of football. And we know that friendship would last at least twenty years more. It’s a story with missing pages, even missing chapters, against the background of two world wars, the 1920s, the Great Depression, and the amazing story of Dick, Kerr Ladies. This is Carmen and Florrie’s story; and what a story it is!

And writing about such a story does not come with it’s own thinking points:

The absolute key place is the website run by Gail Newsham. Or, browse through the pictures and have a look at a rich online resource run by Patrick Brennan with many historical images here.

Next
Football Lives: Making history, not only on the field