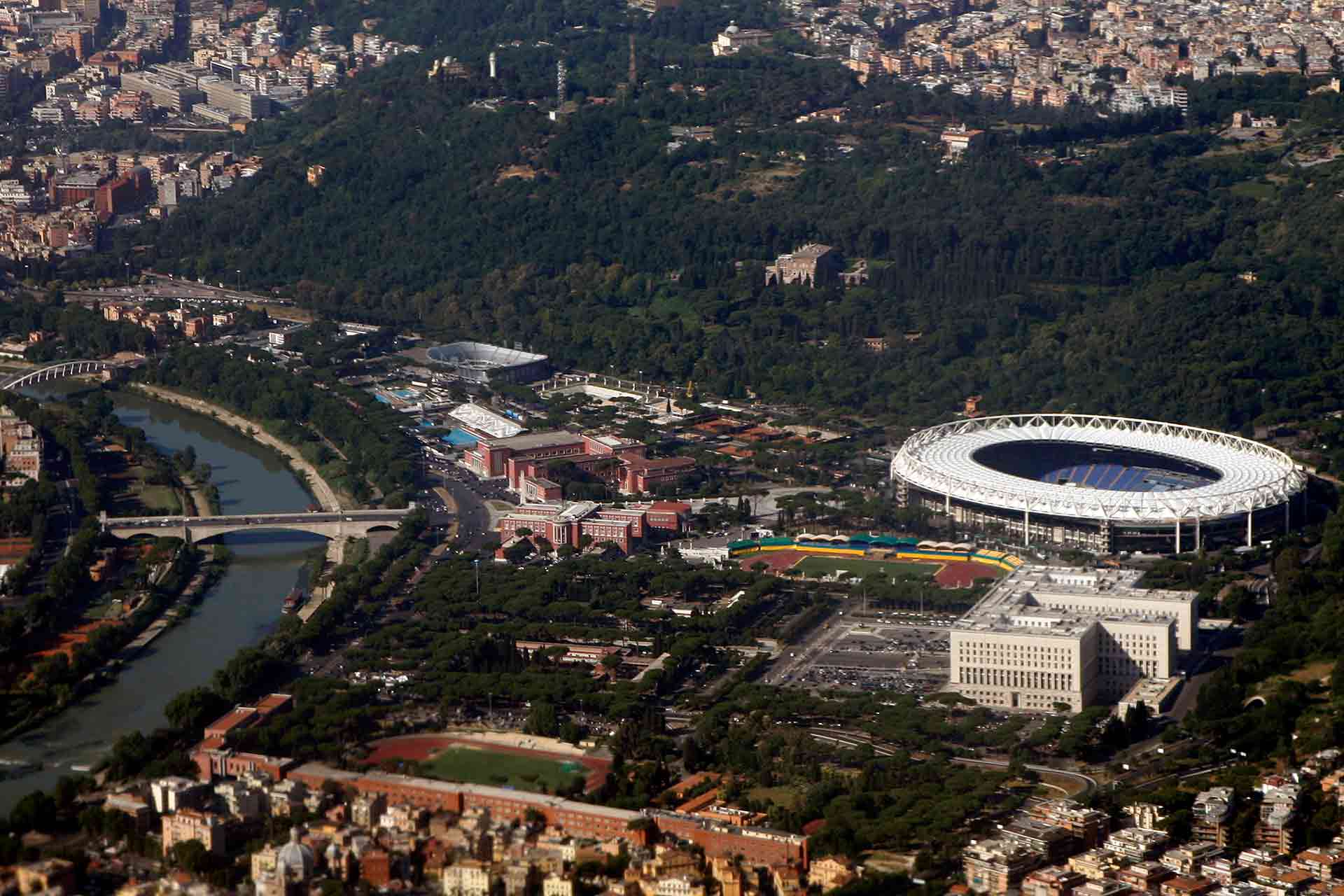 Olympic Stadium in Rome: a pitch of contradictions

A story of contradictions and turbulence

Home
Stories
On This Day
Olympic Stadium in Rome: a pitch of contradictions

On this day, Rome would have been full of European football fans, as one of the hosts of the Euro2020. It would have been the theatre for the opening ceremony and match of the EURO2020 tournament: the Stadio Olimpico in Rome. It is a renowned stadium, which is full of history and contradictions.

Origins amidst the Green Slopes

Despite its name, the Stadio Olimpico wasn’t built for the Olympics, which took place in Rome in 1960. As a matter of fact, it was built three decades before, as part of a fascist sports complex on the Foro Mussolini (now Foro Italico) against the green slopes of one of the hills of Rome: Monte Mario. The stadium was made by digging an enormous hole. This way, the slopes could be used as terraces and the view on the hill would not be disturbed. The stadium’s original name was Stadio dei Cipressi (Cypress Stadium) It was a football pitch, next to another sports stadium: Stadio dei Marmi (Marbles Stadium). Since Stadio dei Cipressi was small and didn’t have proper stands, it wasn’t used in the 1934 World Cup, hosted by Italy – and “used” by Mussolini for fascist propaganda purposes.

After the 1934 World Cup, which was won by Italy, Mussolini made plans to enlarge the stadium to host the Olympic Games. In 1937, shortly after the 1936 Berlin Olympics which were misused for propaganda purposes by Nazi Germany, construction workers started building concrete terraces as well as a second ring. The stadium should have a capacity of 100.000 people. Since Rome’s bids for the 1940 and 1944 Games weren’t successful and the Second World War had broken out, construction work stopped in 1940.

Ten years later new plans were made for “the Stadium of 100.000” (Stadio dei Centomila). With this stadium as the beating heart, Rome managed to win the bid for the 1960 Summer Olympics. Ever since the stadium would proudly be called Stadio Olimpico. Various facilities for other sports were built in this area, known as Foro Italico. In 1960 the Olympic oath was spoken in the former Fascist sports temple. Though athletes still competed with each other for victory, it now became about friendship and sportsmanship instead of propaganda.

To be Rome’s best

In 1953 the Stadio Olimpico got its football pitch, which is shared by AS Roma and Lazio Roma, two sworn enemies since 1927. In that year the fascist party wanted to make one big strong Roman team, which would make the Capital City be able to compete with the strong(er) teams from the north. While Lazio refused to merge, the other three big clubs in Rome did as they were asked to: AS Roma was born. Because of this political background, rivalry immediately was intense. Besides, understandably, both clubs wanted to be Rome’s best.

At the time, there were social and geographical differences between both teams as well. Lazio supporters mostly came from the northern parts of Rome – and its surroundings named Lazio –  and had a certain wealth. The majority of the AS Roma fans lived in the South of the capital and were workers.

A place for an escalating rivalry

Their rivalry slowly developed into hatred when in the 1970s a part of the fans organized themselves in separate groups. On October 28th, 1979 on the Curva Nord a Lazio fan, Vincenzo Paparelli, was hit in the eye by a rocket which was shot by AS Roma fans, after which he died. The hardcore Lazio fans decided to move to the Curva Nord permanently. Because Lazio played a great deal of the 1980s in Serie B (partly forced due to illegal betting) there weren’t that many confrontations between both squads in the years that followed. AS Roma meanwhile, reached the European Cup final, to be played on May 30th, 1984 in their home stadium. After a penalty shootout, Liverpool won. Lazio fans celebrated that day and bantered the whole week after.

A place for national unity

Once in a while, there is some kind of ceasefire between the opposing Roman fans when visiting the Stadio Olimpico. The reason is Squadra Azzurra; the national team. In 1953 it was decided that Italy’s home games should no longer be hosted in Milan but in the country’s capital. This way, twenty-five years after the stadium was originally built, it finally fulfilled its purpose. On May 17th, 1953 Italy met Hungary in the Central European National Cup, which is a forerunner of the European Championship . The first-ever official goal in the stadium was scored by the Hungarian Nandor Hidegkuti. The “Mighty Magyars” won the title, beating Italy 3:0.

Fifteen years later, the final of the European Championship (third edition) was held in Stadio Olimpico. This time, the Italians won –  their only European title to this day. When Stadio Olimpico hosted the finals of the 1990 World Cup, the Italians did not participate; they were beaten in the semifinals by Argentina, in Naples – after penalty shootings. Playing its last ever competition match, West Germany eventually became the 1990 World Champions.

You can find out by reading the Wikipedia entry on Stadio Olimpico, here. Also, you might want to read the event guide made by UEFA around Rome as a host city, this also includes the stadium.

On this day, Rome would have been full of European football fans, as one of the hosts of the Euro2020. This gives us a chance to go into the history of the European Nations Cup, which is full of remarkable stories and people. This is the story of the Olympic Stadium. It is a story about football innovation and bridging countries.

Previous
The coach who bridged nations