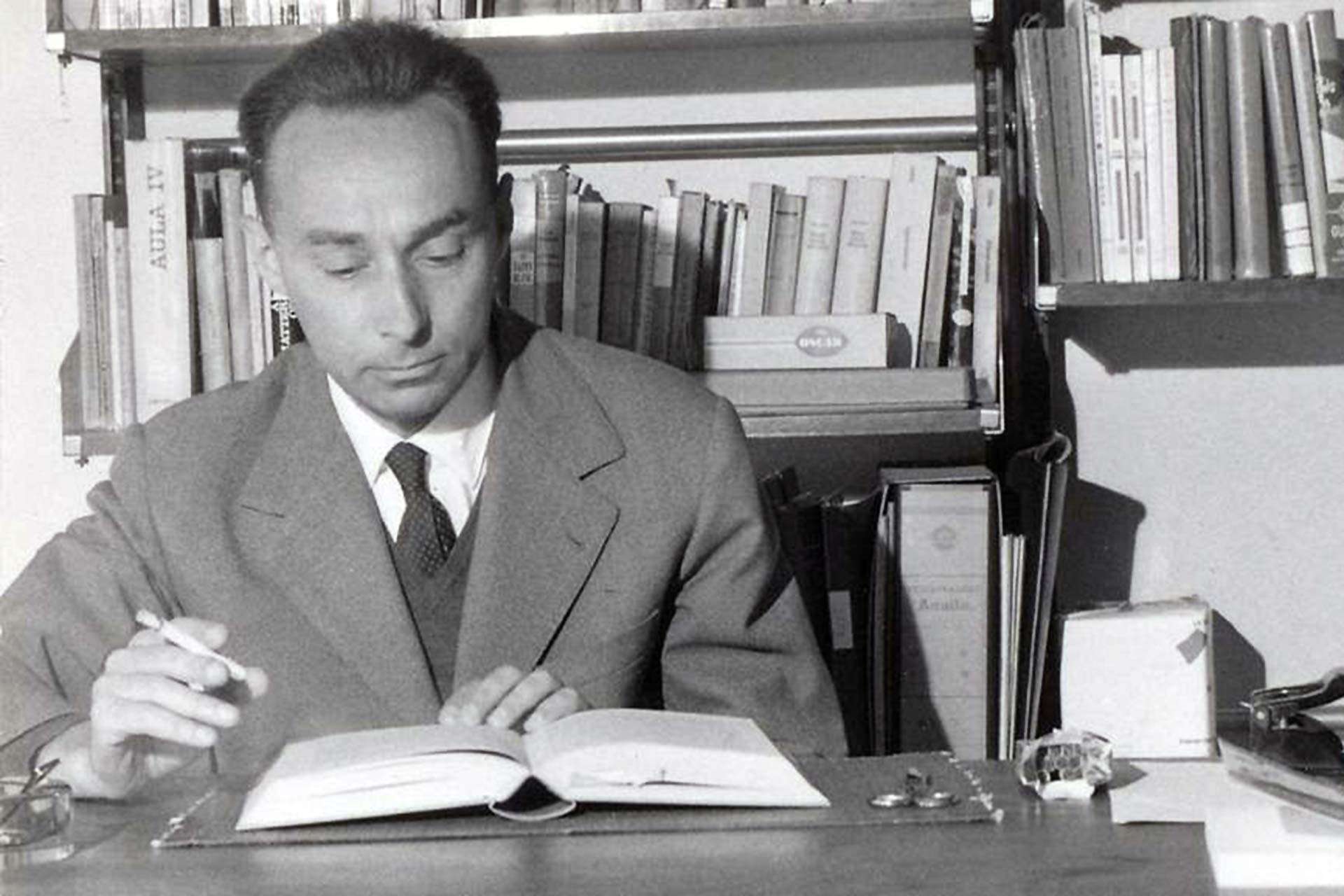 Football was used to dehumanise in the Holocaust, but also offered a way toward normal after

Home
Stories
On This Day
Football in Primo Levi’s Work

Primo Levi, internationally known Italian author with Jewish origin and survivor of Auschwitz, was fond of football. He was from Turin, a pioneer city in Italian football. The city of Juventus FC and of Torino FC. In his work football features several times. How can the rolling and kicking of a ball accompany both horror and leisure?

Primo Levi used football in his literature, who is largely autobiographical, specially when he wrote about World War II and nazi concentration camps. He used it in two different works. First in the essays collection “The drowned and the saved”, in which he describes the lager universe, the relations between perpetrators and victims, the impact of the system on the oppressed people. Secondly, football features in his memoir “The truce”, where he tells about his long and difficult journey from Auschwitz after the end of the war.

Football in the path toward normality

In “The truce”, Levi takes the reader to Poland in the very days after May 8th, 1945, the end of the war in Europe. The Soviet Red Army liberated the Auschwitz lager at the end of January, and in the following months many former prisoners were taken to Katowice by train. There, people want to celebrate the Allies’ victory, and they decide to do it with a football match: a team of local people against a team of Italian ex-prisoners. Actually, it’s the revenge of a first match, played some days before, in which Italians had won easy, Primo Levi says.

He tells us about that revenge match as a reporter supporting the Italian team. First he says that the Polish team “cheated”, because it was not composed anymore by local players, but some of them had even arrived from Warsaw! The best one was the goalkeeper (probably a professional), “a nightmare” who, playing with one hand in the pocket for the whole match, inexorably saved every Italian shoot. In his reporting, he also complains about the referee. He accused him of being too visible, making calls at every minute and making the match last more than two hours. Levi does admit that the ref was impartial in his calls. The narrative portraying this short story is light. It is a story of brotherhood, of people from different countries who have just survived unimaginable horrors, and they slowly start to look again for the little joys of life, and football is a wonderful way to try and build a new normality.

Some months before this, football had been used by Nazi’s for a different, oppressive reason. Primo Levi writes about something he has not witnessed. It’s the narration of a story he heard in the camp. In “The drowned and the saved”, he writes a lot about the relation between victims and perpetrators, and the devious practises connected to what it’s called the “grey zone”. This zone was a sort of “second step condition” between prisoners and nazi camp staff, and it was composed by those taken captive who had some small privilege because they had some specific tasks, such as bringing the corpses from the gas chamber to the crematorium, shaving them, extracting the golden teeth and so on. The “privilege” was something like a little more daily food. Primo Levi says this was a nazi way of dehumanizing some of their victims, transforming them into sort of accomplices. The members of this grey zone team were called SonderKommando (“Special teams”) and here is where football, and other sports like boxing, appears. The SS used football – in other camps as well – to play matches between them and SonderKommando players. The rest of both groups watch at the game, they support, they applaud, they bet, as if “instead in front of the Hell’s doors, the match had been played in a village pitch”. The SS could hereby address SonderKommando members as if they were somehow equals. Levi writes: “We have hugged you, corrupted you, dragged you down with us. You are dirty of your same blood now, as we are. You too, like us and Cain, have killed your brother. Come on, let’s play together”. Football here, and this false equality, is an instrument of oppression. One through which complicity between victims and perpetrators is stipulated, so that there will be no redemption anymore, for anybody. It was not by chance, Levi says, that SonderKommando members were usually intended to certain death, almost none of them survived.

In conclusion, let’s focus on one aspect: the power of football. Not the professional sector in this case, but the amateur game. In the SS-SonderKommando match, Levi helps us see how football was used as a tool by a totalitarian authority. In addition to being able to give sudden death to prisoners, using the game of football has done more to also damn the prisoners’ souls. Here the vertical hierarchy between the two teams uses football as a powerful instrument. In the other case, the self-organized match between Katowice people and Italian survivors of the lager, football is still very powerful, but now there’s no vertical power anymore, everything is generated, decided and organized from the ground, horizontally, by the same people who want to play, as equals. Nobody risks death if he refuses to play. Primo Levi actually fell ill because of the weakness after the match. He had overestimated his physical condition. And the final result is a win-win situation, in which everybody feels the taste of normal life coming back, and probably feels some crumbs of freedom too.

The US Holocaust Memorial Museum offers a special collection for educators to work with the work of Primo Levi. You can also explore the digital archive of the Center for Contemporary Jewish Documentation to discover more about Levi’s life. The Centro Primo Levi also gathers a number of short video’s which educators could work with. Find out more about the works discussed at the Centre for the Study of Primo Levi.

This article is based on various works, including Massimiliano Castellani and Adam Smulevich’s Un calcio al razzismo. 20 lezioni contro l’odio (2019), and Primo Levi’s The Truce and The Drowned and the Saved.

On this day, 31 July, in 1919, Primo Levi was born in Turin, Italy. In his works about his experiences in the Shoah and afterwards, Levi recalls football on two occasions.

Next
A World in Motion