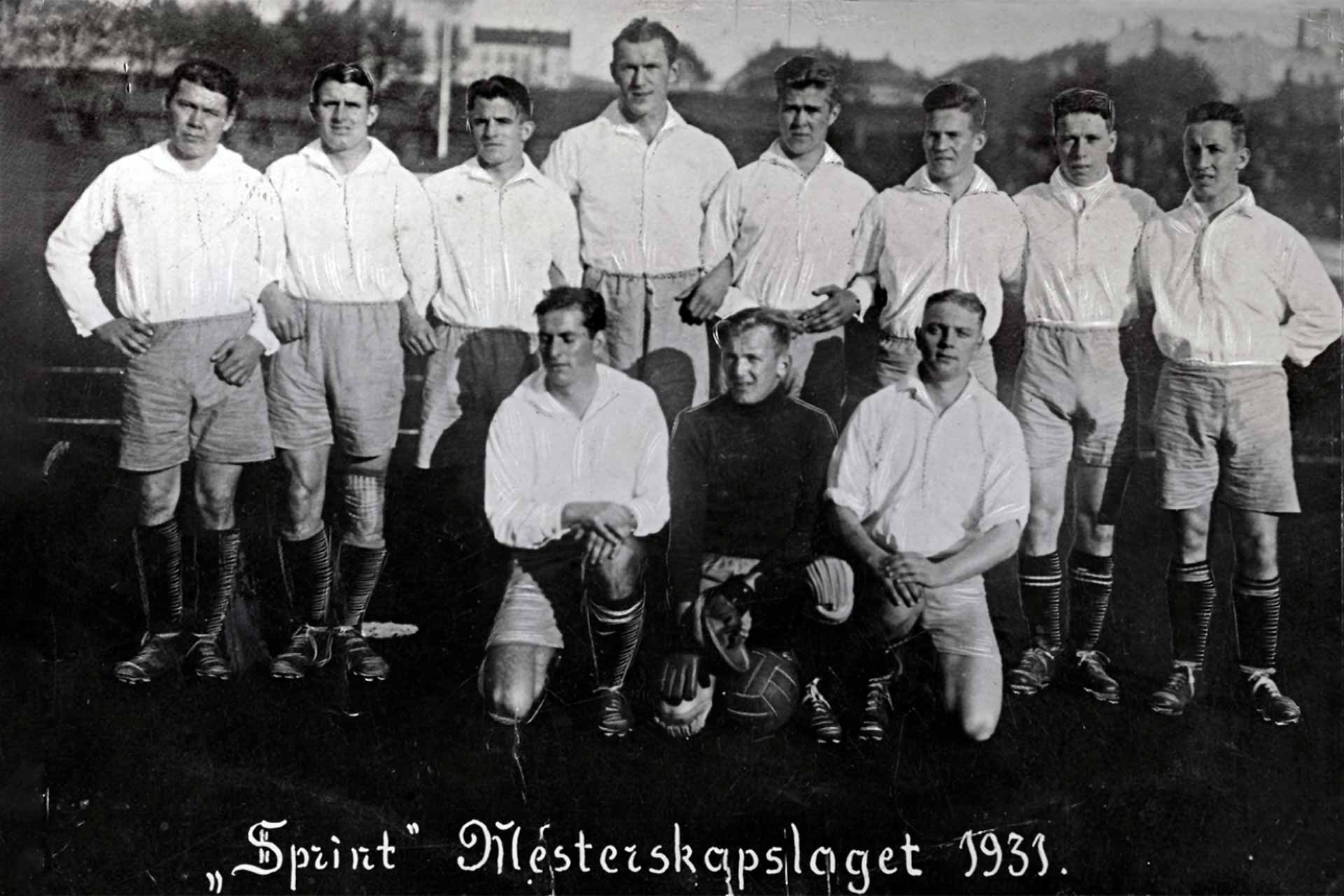 Class war on the football pitch

A working class struggle to play football in Norway

Home
Stories
On This Day
Class war on the football pitch

On this day, International Workers’ Day, also known as Labour Day or May Day, is celebrated in many countries around the world to honour and remember the struggle and fight for rights for the working class and workers.

During the latter half of the 19th century and the beginning of the 20th century, the labour movement worked for social and political rights in many European countries. Football is often viewed as the sport of the working class. But as in other areas of society, there was a time when the working class was denied the right to play the beautiful game.

The right to play

Norway could serve as an example of the countries that underwent a rapid change following industrialization during the second half of the 19th century. A working class, in the beginning without political and social rights, emerged. To gain rights, the working class organized itself into the labour movement, creating their own political party in 1887 to fight for political rights, and a labour union in 1899. The organizing paid off. In 1898 all men above the age of 25 were given voting rights, in 1913 voting rights for women followed. In 1915 working conditions were improved with implementation of the 10-hour working day and in 1919 the 8-hour working day.

But on the football field many from the working class felt excluded. The first football club in Norway, Kristiania Football Club, was established in 1885. In the early days football was a sport played among the upper classes of society. But its popularity soon reached the lower classes of society and the growing number of young men in the working class. In principle football was, and still is, a very democratic sport. Anyone could make themselves a ball out of paper or rags and kick it in the nearest field or street. Football could become a tool of social integration between social classes and something to unite people across classes in a society where hostility, suspiciousness and distance between the classes was the norm.

The popularity and spread of football were also fuelled by the reforms of 1915 and 1919. With reduced working days, the working class had more spare time that needed to be filled with useful activities. Football was regarded as a means to prevent social problems, such as drinking and crime, among young men in the working class. But instead of becoming a tool for social integration, many footballers with working class backgrounds experienced exclusion from the existing football clubs and the football association, similar to the exclusion they had experienced in other areas of society earlier. In order to prevent players from the lower reaches of society to become members, the established football clubs raised their memberships fees so the applying members could not afford to join.

Meanwhile in other clubs, such as Lyn from Oslo and Djerv from Bergen had rules for membership, meaning that a player had to be recommended by one or several members of the club and then approved by the club’s board in order to join the club. It is worth noting that some players from the working class were welcomed if they could bring success on the pitch to the club. Clubs such as Brann and Odd Skien, both clubs with a bourgeois background, allowed players from the working class in their team if they were good enough.

Being denied the opportunity to join the established clubs, the solution among those who wanted to play organized football was to start their own clubs. To be able to play in the league and cup, a club had to be a member of the Norwegian football association. But this opportunity was also blocked by the established clubs as they had the right to put down veto against new clubs joining the FA. The resistance from the established clubs and the FA did little or nothing to curb the popularity of football among boys and young men from the working class. As an answer to the blockade unofficial leagues popped up several places.

Vanguards of the revolution

The rising popularity of football and struggle to be able to play the beautiful game coincided with other developments in Norwegian society and politics. Class struggle, labour disputes and strikes were common at the beginning of the 1920’s. A revolutionary Labour party was gaining more and more support, joining the Communist International in 1919. Sports and football were not unaffected by this situation. During the general strike in 1921, rumours were that the chairman of Lyn had recruited members among the scabs and that players from Brann Bergen had joined “Samfundshjelpen,” an organization inspired by the German organization “Technische Nothilfe” to organize strikebreakers and help factories and stores running in case of a strike. These rumours fuelled the class conflict on football grounds.

On the other side there were central political figures in the labour movement who saw the growing popularity of sport and football among the working class as a way to combine political propaganda and agitation with physical activity. There were also those who saw sport and physical activity as a distraction from the class war, especially among the older generation. But among the younger politicians there was a sense that the sporting fields and football grounds could be a new scene for the class war, a way to keep young people from the working class away from bourgeois influence and the sporting youngsters could be the vanguard of the revolution. This notion is illustrated by a quote by Einar Gerhardsen, who later served as prime minister for 16 years after World War II: “A worker is a worker, whether he is wearing his working shirt or a sports shirt. Workers cannot, even when they are on the sports ground, become friends with their enemies and opponents.”

In 1923 the sports club Spartacus, which had been established by the Labour party’s youth organization, initiated a new football league in Oslo for clubs with working class backgrounds. This was a prelude to what followed a year after. In 1924 the final break came between the established sports movement and the working class with the foundation of Arbeidernes Idrettsforbund (the workers’ sports federation). Internationally the new federation was connected to the Red Sport International, a sports affiliation of the Communist Internationale. This happened although the Norwegian Labour party had left the revolutionary road a year earlier, resulting in a break with the Comintern and a split with the communists who still wanted to be true to Moscow and Lenin’s principles.

Football was among the sports of the new federation. A league system was organized, and a national cup was set up with 21 participating teams in 1924. In 1938 the number had grown to include 150 teams. At the same time, more than 500 clubs connected to Arbeidernes Idrettsforbund offered their members the opportunity to play football. The federation even organized its own national team, playing against other federations that were connected to the Red Sport International. In 55 matches, the national team representing Arbeidernes Idrettsforbund won 38 times. This happened at the same time as the Norwegian national team, coached by Asbjørn Halvorsen, representing the Norwegian FA, won bronze medals in the 1936 Olympics.

From revolution to reconciliation

Although the creation of a sports federation and football leagues for the working class gave many boys and girls opportunities to practice their sport, the movement never became the tool for a revolution as some of the leading initiators had hoped. In the 1930s the communists had lost their leading roles in the movement and social democrats were in leading positions. The agitation for a revolution was replaced with a focus on health and physical education of the working class. By the same time the support for the Labour party grew and in 1935 the party was in governmental position. This could be seen as the culmination of the working class’ fight for political rights.

For the first time, the football clubs connected to the working class were given state grants to build their grounds. Just as the worker’s sports movement became less political, the bourgeois sports movement and the FA also changed their principles. New clubs were accepted, and the political and social background of the players became less important. In many places, players from the working class became accepted as members of the clubs connected to the FA, although there were places where this was seen as totally unacceptable and a class betrayal. In the years before World War II there were central leaders on both sides that worked for a reconciliation between the two sides. Football matches were arranged between teams from the two federations and talks were held about uniting the sides.

This was interrupted by the German invasion in 1940. The sports movement united in a common front against the Germans and the Quisling regime. Footballers and sports men and women refused to take part in activities arranged by the Nazis. Instead, illegal football matches were arranged. With the end of the war the sports movement was united, and the football clubs became fully fledged members of the FA. 25 years of class war on the football pitches had ended and football became a symbol of hope of reconciliation between the classes.

For those who understand the Scandinavian languages there is an article about the worker’s sports movement in Norway on the website of Arbeiderbevegelsens arkiv og bibliotek.

Previous
The Blitz and the Oval

Next
My boyfriend, my husband, and my lover