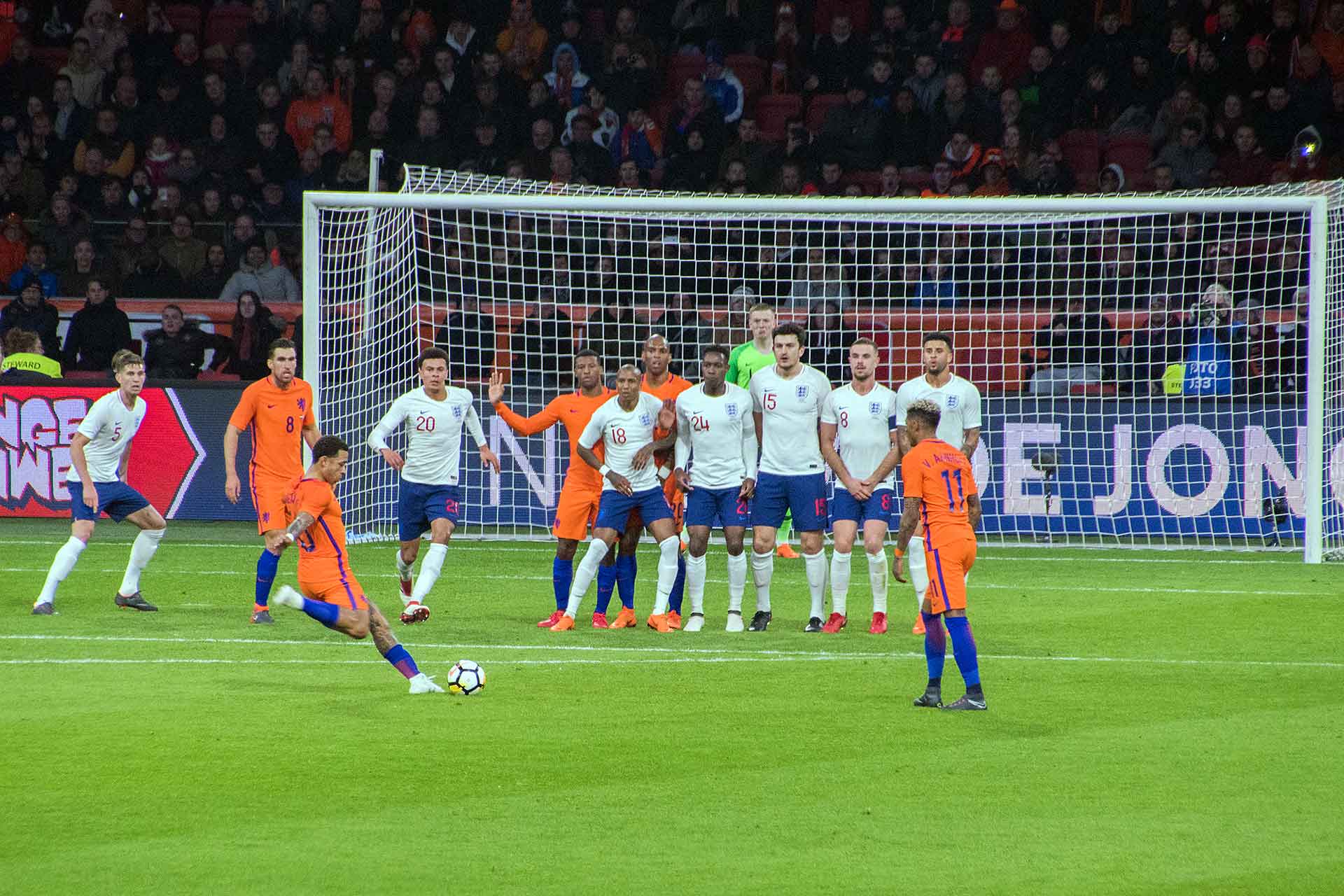 Memphis Depay about to shoot against England (Photo: Wikicommons).
On This Day
·June 22, 2020·8 min read

Black and white in the orange

Euro 1996 showed the world that the team is not orange, but black and white; us and them.

Home
Stories
On This Day
Black and white in the orange

Today, 22 June 2020, a young and confidently multicultural Dutch team would have played in Amsterdam at the Euro2020. This team would be led by world-class defender Virgil van Dijk, who led the initiative for Liverpool to support the Black Lives Matter movement. Among his teammates would be the outspoken black players: Memphis Depay, Georginio Wijnaldum and Denzel Dumfries, as well as leading white players Frenkie de Jong and Matthijs de Ligt, among others. Nearly all players in this national team, and many more, have used their global communication platforms to address racism and continue to inspire millions. But this was not always the situation in Dutch football. What do we find when we look at Dutch football’s history with racism?

A bit of history

The Netherlands is a country with a colonial history. In the 19th century, following centuries of colonial expansion and exploitation, it established more direct imperial rule over what is today Indonesia, Suriname and a number of caribbean islands. Indonesia declared independence in 1945, and won a bloody independence war with The Netherlands in 1949. Suriname gained independence in 1975. During that period more Surinamese families (partially) migrated to The Netherlands, for work, studies or love. Studies into the colonial history of The Netherlands, in particular the role of slavery and the nature of Dutch war crimes in Indonesia, are popular to stir public debate, as the society faces its colonial heritage. This is part of the canvas against which this football story is painted.

Today, 24 years ago another Dutch team was knocked out by France at the Euro 1996 in, coincidentally, Liverpool. That team, fielding – among others – young (black) Clarence Seedorf, Edgar Davids and Patrick Kluivert, struggled with tension arising from inequalities among the players. What exactly happened between these players at the Euro 1996 is a story told differently by different people, but the world could see how a group was divided in two camps: black and white.

Some explain that tensions were related to different salaries players were receiving at Ajax, where most of the black players were receiving lower rates. Others explain that these differences have no racial rationale, but were rather relative to players’ professional progress. Yet others refer to other factors, such as the world champion’s status of the star players of Ajax (Amsterdam), the high expectations and pressure to perform at a young age.

What was exactly said in those locker, and hotel rooms, we don’t know. Commenting on this period later, (black) player Winston Bogarde reflected that “this was our time”, whereas (white) Ronald de Boer said “there were more of them. They also started celebrating Suriname more”. But whatever the exact case, as Dutch sport journalist Tom Egbers said “1996 showed us all that the team is not orange, but black and white; us and them”.

The Dutch team, however, was able to advance. The quarter final against France was a true thriller. If the Dutch had won and advanced, the division within the team at the start of the tournament might not have been reflected upon as much.

Pioneers with a mission

Going back even further, we are in the Euro 1988 in West Germany, where the Dutch squad won the country’s men first (and only) title with black football stars such as Ruud Gullit and Frank Rijkaard. Captain Striker Gullit dedicated his 1987 Ballon d’Or to Nelson Mandela and has spoken about the many instances of racism he experienced in his career in The Netherlands, and later also in Italy and the United Kingdom. He has spoken out as an ambassador to the Dutch FA and UEFA against racism at various instances, for example during the Euro 2012.

In 1989, Dutch football history could have been completely rewritten, when 176 people died in a plane crash in Suriname. On board were players and organisers of a social charity football match to be played in Suriname, called “The Colourful 11”. Because professional clubs denied permission, Gullit, Rijkaard and several other black players did not board the plane.

Rijkaard and Gullit made their debuts in orange in 1981. They were the third and fourth Dutch players from Surinamese background to do so. Later on, they acknowledged the earlier black players in Dutch football history. Also Clarence Seedorf has meant a lot to develop football in Suriname, as well as being a UEFA’s global ambassador for diversity and change.

Neither heaven nor hell

Humphrey Mijnals is one such pioneer, being the first Dutch player from Surinamese background to play in the national team. At the time, Suriname was still a Dutch colony, his debut received mixed reactions in the press. Besides comments about his sport performance, one journalist indicated that “we don’t want to measure a football performance against the background of racial discrimination, which is happening a lot lately. We are afraid that Mijnals’ debut has partly been established due to this background, which we regret, especially for himself”.

Several of these first black players in the late 1950’s early 1960’s played at Utrecht-side Elinkwijk. They endured racism in each away game. A 1960 article refers to a common joke about “a negro” who gets a place neither in heaven nor hell, so he is to play for Elinkwijk.

Mijnals was recognised in the Dutch FA Hall of Fame in April 2019. He was still alive to see the recognition, but sadly passed away on 27 Juli 2019 . Former Dutch national player Edgar Davids posted on Instagram in response: “I often wondered if I would have had the same mental strength he had in the ‘60s!”

Black presence in Dutch football, however, goes back to the beginning of the 20th century. Constant Cremer, for example, born in Congo, son to a Dutch merchant for the African Trade Company, played successfully for Tilburg-side Willem II.

Back to the present. In late 2019, the Dutch Football Association (KNVB) in 2019 launched a sizable action plan worth 14 million euros to combat racism in and around football in response to another instance of racial abuse by fans. Gullit now, looking back, sees a change in how players – such as the current Dutch team – is confident and collected in speaking out , not being afraid of what it might mean for their transfer value and/or reputation. John Olivieira, president of the board Fare Network (partner in Football Makes History), spoke out in favour of more black voices standing up and speaking out. And this seems to be what 2020 is making happen.

Those present at the launch of the KNVB’s action plan noted that more needs to be done than the fight against stadium chants and incidents. As Jacco van Sterkenburg, researcher of the Erasmus University Rotterdam posed that “Where are the measures around inclusion and diversity? Online racism, the role of the media, stereotypes around skin color? This is not addressed. We need to be courageous and start this conversation.”

Star players of the Dutch team which was supposed to play at the Euro2020 today have attended anti-racism demonstrations. Also former players are sharing more personal and telling perspectives on their experiences with racism, and seeking to shape an inclusive future with more diverse leadership in football, for example.

Our partner Fare Network reported in detail about the 2019 KNVB Action plan. Dutch public broadcaster produced a documentary in 2008 about the 1996 tournament (in Dutch). The Guardian wrote a report looking further into the financial dimension of the row. The dramatic penalty shoot-out in 1996 can be watched here. Footage of Humphrey Mijnals playing at Elinkwijk is available here and the 1988 victory of The Netherlands in the finals here.

On this day at the Euro2020, an inclusive Dutch team would have played in Amsterdam. Something of a contrast with the Dutch team who lost to France 24 years ago on this date during the Euro1996. An opportunity to use football as a lens into changes in Dutch society, the role of footballers and a look ahead.