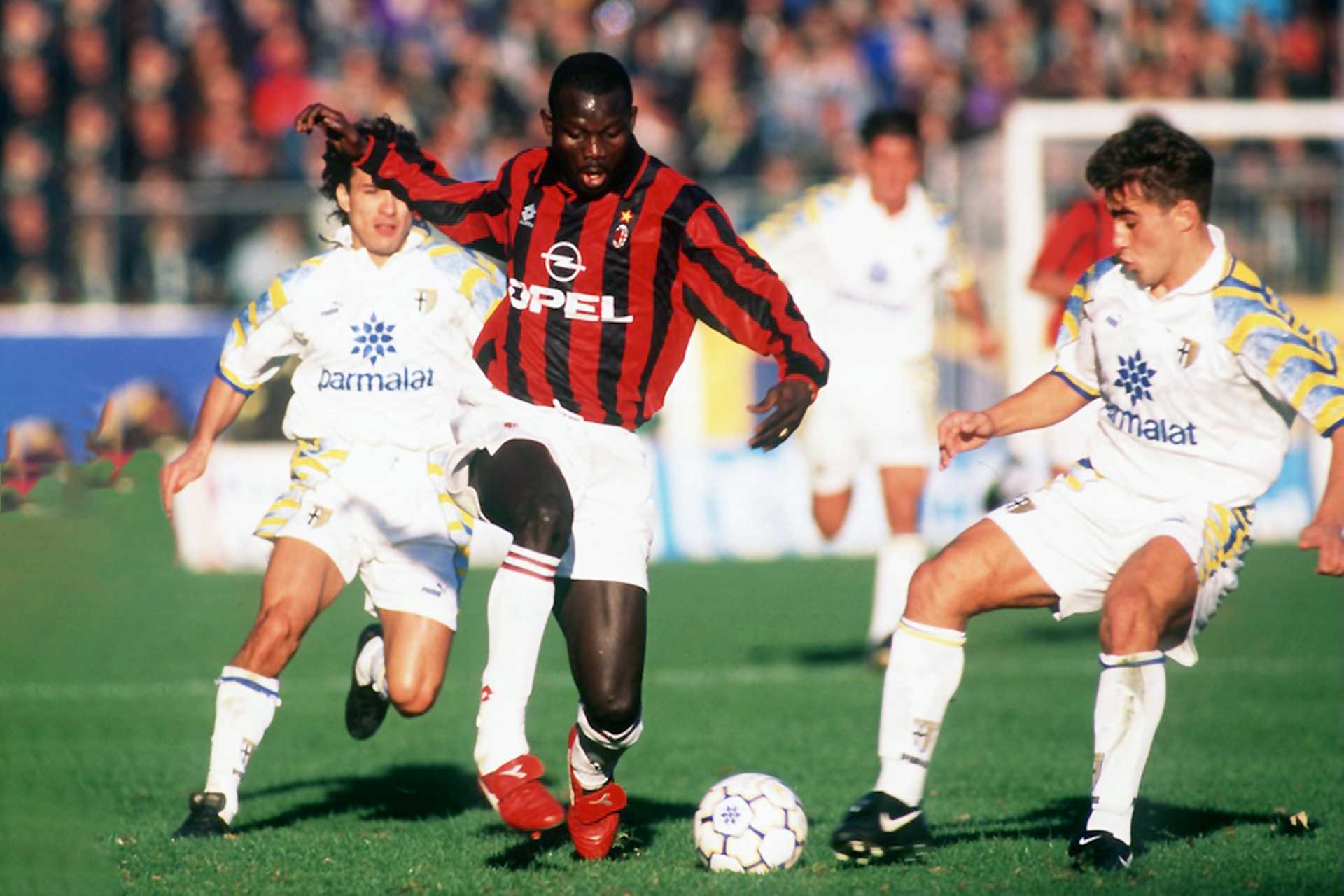 Ballon d’Or at the presidential palace

From moving the ball to leading the land

Throughout the years, football has proven to be a great catalyst for social mobility. It gives hope of a better life and a clear horizon to many disadvantaged youths all around the world. When thinking of rags-to-riches stories, the greats of the past century come immediately to mind, like Maradona and Pele: two players who reached superstardom while coming from abject poverty.

One of the most striking stories of this kind, though, is that of George Weah’s meteoric rise from the slums of Monrovia. A young, prolific striker who, via the stadiums of AC Monaco, PSG and AC Milan, reached the presidential palace of Liberia.

From the slums in Monrovia to the lights of San Siro

Weah grew up in the slum of Clara Town, a precarious settlement built on a swamp, plagued by disease and overcrowding. He took his first steps in football in the local Liberian league. Balancing football, work and high school proved too much for Weah, who eventually dropped out from school as his football career started to lift off. His meteoric rise began when, playing at a Cameroonian team, he was noticed by the head coach of the Cameroonian national team, Claude Le Roy. Le Roy promptly shared the news with then-AC Monaco coach Arsene Wenger, who signed him for a measly £12,000. A life long mentorship and friendship developed between Weah and Wenger.

Weah reached his prime in the French and Italian leagues. The greatest example of the Weah style might just be the famous goal he scored for the Rossonero against Hellas Verona at San Siro. After recovering the ball from a corner kick, Weah ran the full pitch, leaving a host of Verona defenders in his wake, and coolly placed the ball to the keeper’s right side. His performances for AC Milan and PSG got him the Ballon D’Or and the FIFA Player of the Year in 1995, becoming the first (and to this day only!) African player to be awarded these honours.

The rocky road to the president’s chair

Before being elected, Weah made a number of unsuccessful bids for power. In 2005, he was beaten by Ellen Johnson Sirleaf, in a campaign where he came under fire for lacking a degree. Weah, unfazed by the critics, finished high school, enrolled at an American university and graduated with a business degree. Yet another showcase of his signature tenacity.

In 2017, Weah was elected to the nation’s highest office. He was greatly aided by his hero status as the country’s most famous sportsperson. Weah was seen by many as the role model who could overcome his humble beginnings, a narrative that resonated well amongst voters. His platform was based on tackling corruption and veering towards institutionalism, healing the economy and investing in education.

Decades of internal conflict (1989 – 2003) meant that president Weah inherited a war-torn country, with an ever shrinking economy and open social wounds. The SARS and Ebola epidemics had also wreaked havoc on Liberia, while the price of their key exports plummeted: in short, Weah had his work cut out for him.

A few years into his presidency, Weah is facing louder and louder criticism for his country’s economic performance. His promises of recovery seem unfulfilled in a country with a dire need for jobs and a higher standard of living: according to the World Bank, half of Liberia lives with less than €1.69 a day.  Weah and his government have been accused of corruption, and some vanity projects undertaken, such as the re-roofing of houses in the slum where the president himself grew up, seem tone-deaf in a delicate context. His most resounding victory to date appears to be his educational reform, where tuition fees were scrapped in an attempt to stimulate attendance and accessibility, though critics point out how this exacerbated the already delicate financial state of public universities.

Liberia is currently bracing itself for the development of the new coronavirus, and its government has begun to take measures, with varying degrees of success. Open marketplaces, a mostly informal economy and crowded slums present major obstacles when it comes to developing policy against the pandemic, and measures that affect the livelihood of the poorest echelons of society could have dire consequences. The Liberian health system seems to be regretfully unprepared for the consequences of yet another pandemic.

Basque in the USSR

King George is evidently not exempt of the governance challenges of his predecessors. It is yet to be seen how history judges him. What we do know is that before us, a story of unwavering commitment, great ambition and success is unfolding. As for the rest, only time will tell.

In some societies, there are few ways for marginalised people to be included into society. What is the potential of football as a tool for social mobility? What can we learn from Maradona, Pele and Weah?

Football brings remarkable players to the public eye. Oftentimes, sportspeople get access to a platform to express their opinions on subjects that are not sports related: think of Klopp’s clapback when asked about the coronavirus, or Maradona’s endorsement of the Chavez administration in Venezuela. Is being an excellent sportsman a good qualification for public service? Should sportspeople get unchecked access to media, knowing how wide their audiences are? What are other examples of sportspeople making the jump to politics.

On this day, 11th October, in 2005, football star George Weah ran for the office of president of Liberia.

Previous
The Birth of a Club: looking at local football to learn about the past