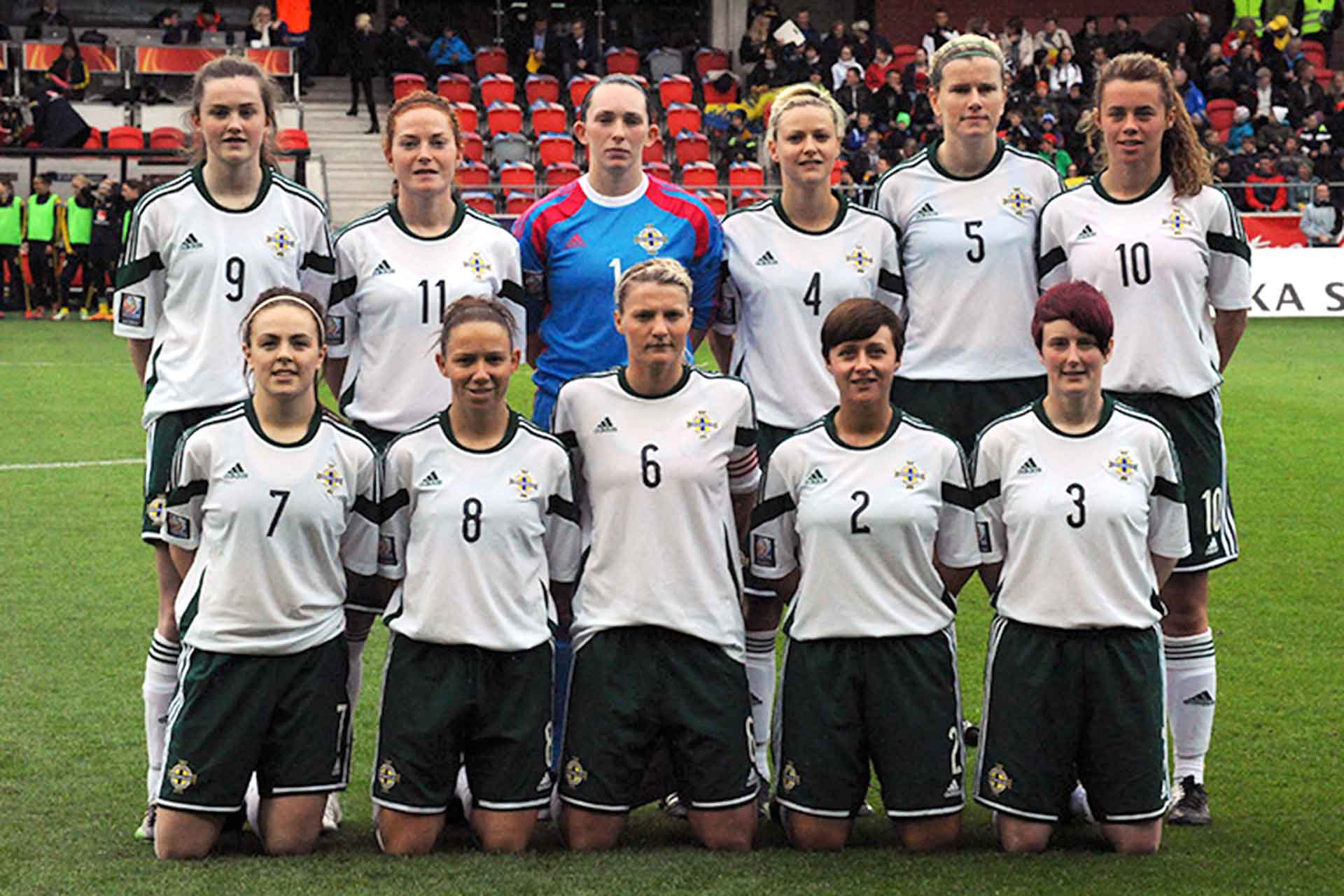 Women’s football in Northern Ireland: over a century of history recovered

Retelling the history of the women’s football in Northern Ireland offers us a view on how the game came, went and is here to stay.

On 26th December 2020, the BBC Radio Ulster released Girls with Goals, a historic look at the story of women’s football in Northern Ireland. This was a fascinating historical look at how the game developed for women since the 1890s and how there were many challenges along the way before the latest Northern Ireland women’s team booked their place in the playoffs on 1st December 2020. The Northern Ireland senior women’s squad had been paused in 2000 after a 9-0 defeat to Scotland. Sara Booth explained, “We played Scotland in November 2000 and they beat us 9-0.  By the time we got back to Belfast the Irish FA had got rid of the senior team.” It would take 20 years to rebuild, but this would be only the final act in a historically long and important journey.

From the first match in Belfast in 1895, the women’s game developed in Northern Ireland, although it did not always get the support that it deserved. Tara Lynne O’Neill has researched the early story of the women’s game extensively, as she is preparing a play called Rough Girls about the place of women in football during the partition of Ireland period, a project that she hopes to complete after lockdown. To find out more about the women’s game, O’Neill has had to rely on the popular press and the advertisements of the various charity games that were held, such as the Boxing Day match of 1917 that was advertised as an international match between Ireland and England. The money that was lifted at the gates at charity matches such as these went to the soldier and sailors’ home in Belfast. O’Neill looked at Irish Football Association (IFA) minutes to find out the impact that the English FA ban on women’s football had on the game in Northern Ireland in the early 1920s.

As if it never existed

As the ban is never noted in these minutes and indeed women’s football was never mentioned in these minutes, O’Neill noted that it was difficult to say how it was affected in Northern Ireland. ’’It’s almost as if the women’s game never existed.’’ “Men, whose matches were played in the dangerous atmosphere of the civil unrest, were suggesting that it was unsuitable for women to play. In contrast, politics stayed out of the women’s games which were more family orientated. Crowds continued to flock to their matches.” O’Neill postulated in Girls with Goals that attendance at women’s matches such as one notable example at Windsor Park could attract over 10000 spectators, where the men’s game was struggling to get 3000.

Steve Bolton, whose grandmother Lizzy Ashcroft played for St Helens and the Dick, Kerr Ladies and who has researched this period exhaustively notes that it was as if the male English FA of the time saw the women’s game as an out of control monster taking place on their hallowed turf and who were determined to “strangle the women’s game”. Bolton notes that the ban had the effect of making women footballers pioneers in every generation when they should have just been allowed to play football rather than battle against sexist attitudes and prejudices.  In some of his recent research, Bolton has found evidence of matches that were played in the 1920s in places such as the Waterside in Derry in spite of the ban in England.

In Girls with Goals, Bolton comments that the women’s game had a massive renaissance in the 1930s and that matches were back on the main stages including Windsor Park where his grandmother played twice. Lizzy Ashcroft had started playing football in one of several Mill teams and trained at Crusaders. There was a good attendance at these matches, players were paid ten shillings and her daughter Valerie Beattie recalls that the Mill bosses definitely wanted their team to win.

In the 1970s the inaugural meeting of the Northern Ireland Women’s Football Association was held in Belfast. Sue O’Neill notes in Girls with Goals that the idea was to grow a sustainable game and to get women involved in sport. From the beginning, there were those who did not believe that the project would be a success but decided on this criticism, the women’s game established itself in Northern Ireland, despite the enduring Troubles conflict.  Sue O’Neill comments that football was a game that crossed the divide and that there was no sectarianism in women’s football, with teams that would go and play on pitches in areas that others wouldn’t. In the 1978 season, there were two divisions, and this has expanded to its present size today of 46 teams with approximately 1200 players (over the age of 14) completing in six divisions during the months of April to September. Some doubters thought that the project wouldn’t last five years.

While there were signs of growth in women’s league football, the Northern Ireland national team decided to pause the senior international side in 2000 and to invest in the youth program. This was devastating to some of the dedicated players at the time such as Sara Booth, but with promising young players coming up such as Sarah McFadden, Ashley Hutton, and Marissa Callaghan, Booth and NIFWA Chairwoman decided to push for change, “We brought a paper to the IFA saying if a senior team wasn’t created tomorrow, the girls would defect to the Republic of Ireland. The next morning we had a team and a budget of £10000.“

Despite this cash injection, the squad had to fundraise to fund their involvement in the Algarve Cup of 2004.  Alfie Wylie notes in Girls with Goals that those girls were game changers and they would be invited back to the Algarve Cup where they would win their first match against Portugal and resume their place in the Senior game, playing again in the World Cup Qualifiers of 2005. Despite missing out on several years at the senior level, Sara Booth admits that the IFA made “100% the right decision’ to refocus their attention to the youth set up.  It has paid dividends and there is a whole generation coming in behind because of what the IFA has done.”

The current Northern Ireland Senior women’s team played their first-ever playoff matches against Ukraine on the 9th and 13th of April. They defeated Ukraine 4-1 on aggregate after an incredible two-leg performance. This caps a remarkable seventeen-year story for the Northern Ireland Senior Women’s squad after the squad was reformed in 2004, all the more remarkable as many of the players are part-time. The senior players in the team were part of the rebuilding process over the last twenty years and their efforts have been rewarded and they have helped to fashion this team that is brimming with so many talented young footballers. Their successful campaign and their presence at the Euros will inspire young girls to play football in the way that legends of the game Molly Seaton and Lizzy Ashcroft did in the century before and building on the legacy of those early Mill teams and the League teams of the 1970s, who kept the women’s game alive in Northern Ireland. An exciting new chapter is going to be written.

Next
Let the students decide!